Why Did My Spouse have an Affair?

Why Did My Spouse Have an Affair?

This is a very common question for spouses to ask after their husband or wife commits adultery. Here are some very important points to consider if you are one of those consumed with trying to figure out why your spouse had an affair. 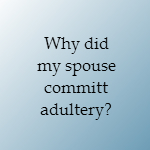 Why You are Asking the Question

Spouses often want to know why their spouse had an affair because if they can get a solid answer as to why their spouse committed adultery, then they feel they can grasp a sense of control as to how to avoid it ever happening again.

The only problem with this approach is that a spouse in such a case is often trying to understand with logic that which was purely based in emotion. And, sometimes, there is just not a logical reason as to why a spouse committed adultery.

Sometimes, there Is Not a Good Answer

I have six children ranging from infancy to 18 years of age. If they ever disobey I try to refrain from asking them why. Here’s why: It will only lead to them giving me a distant stare with no real answer. This is because there is often not a logical reason as to why they followed their passions and disobeyed. They followed their feelings because they wanted to, and that is hardly a good reason. It may be an explanation, but it is hardly a valid reason.

In cases where adultery has occurred, the same is sometimes true. This is because lust is like a fire. And, if a fire of lust ever kindles in someone, they have a choice to either put that fire out or feed it with thoughts and actions. Sometimes, for no logical reason whatsoever, people will feed that fire with phone calls, texting, and secret get-togethers. Simply put, they feed it because they want to and it feels good at the time.

David is a classic example of this in the scriptures. He had everything a man could want yet he committed adultery with Bathsheeba. In fact, in II Samuel 12, when Nathan confronts David over his sin of adultery, he uses a little story to convey his message. The entire point of the illustration is to show David that his adultery was senseless and purely based upon wanting something that he did not need in the first place.

Sometimes, there is a Good Answer

This morning, I was reading from Matthew Henry. In short, he wrote of those whose sins of omission often lead to sins of comission. In other words, it is often what we fail to do that leads people to do those things that are displeasing to the Lord. In other words, when people fail to read their Bibles, pray without ceasing, and maintain a loving relationship with the Lord, they are increasing their chances of being lured into areas of spiritual darkness.

In regards to adultery, it is utterly common for the problem to be a matter of omission that leads to sins of comission. That is, if spouses are not consistently working at walking in the light of unconditional love, they will find a greater temptation to walk in the darkness of adutlery. Therefore, the better question to ask is not so much why did adultery occur in our marriage as much as what can the both of us do to walk in the light of God’s Word in our marriage so as to avoid further temptation.

In our marriage book, How to Fight for Your Marriage Without Fighting With One Another, we help couples to start walking in the light of God’s Word in order to solve their marriage issues. Simply put, we help couples to start focusing on walking in the light of unconditional love and wisdom so as to better help them to avoid falling into the various chasms of sin and selfishness.