How To Rebuild Trust In A Marriage

We hope you enjoy this excerpt from chapter 5 of our new Christian marriage book, How to Fight for Your Marriage Without Fighting with One Another. It not only shows couples how to rebuild trust in a marriage, but it also teaches a very valuable lesson that many husbands will be wise to learn.

For a woman, marriage is a bridge upon which she desires to safely walk. If that bridge has ever fallen through, she thinks twice before bearing all her weight on it again.

Most women simply want to know that their relationship with their husband is stable in the areas of unconditional love, commitment, emotional intimacy, and finances. Deep down, they desire to know that this bridge called marriage will hold up their sense of self worth as well as their expectations. When it shows signs of weakness, they tend to test its strength by doing what I call jumping up and down. This is usually done in one or more of the following ways:

1. A wife may withhold her love for her husband until she sees that he truly cares about her and not merely himself.

2. She may show hesitancy to act like everything is fine in the marriage.

3. Some act cold or indifferent about the marriage until they see viable change.

4. A wife might question her husband’s motives for making changes for the better.

5. A woman could display a lack of willingness to participate in physical intimacy.

6. She could be curt, and, at times, rude toward her husband.

These are all natural tendencies for a wife that feels insecure about her relationship with her husband. This, of course, does not condone this type of behavior, but it certainly explains why some wives are tempted to act in such a way. I often say that though this describes a woman’s behavior, it does not necessarily prescribe what should happen in a marriage.

Wooing Your Wife On That Bridge

Many a man has found himself standing on a broken down, dilapidated bridge called marriage, trying to encourage his wife to follow. While he stands wooing, begging, and, sometimes, pleading with his wife to trust him once more, she often reacts with reluctance. It is not so much her reluctance or lack thereof that will determine their success, as much as his reaction to her reluctance that will be key. 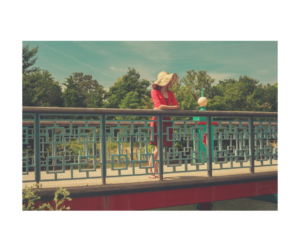 Some men, while standing on that bridge, feel either afraid or overwhelmed by the task. Others feel incapable. Either way, they will do well not to run and hide from their God-given responsibility to promote an atmosphere of safety in their marriage through sacrificial service and safe conversation.

Other men err in that they focus on their wife’s reluctance rather than their responsibility to strengthen the bridge with the planks of unconditional love and biblical character. This is a crucial mistake that many, if not most, men make as they work at rebuilding trust in a marriage.

Early in our marriage, I was guilty of such behavior. Rather than rebuilding the bridge of trust through unconditional love and kindness, I was more focused on the thought of my wife jumping up and down. This only served to delay any type of substantial success.

As a young married man, I would try to use my carefully constructed arguments and long lectures to reassure my wife, Melody, that the bridge would never fall through again. Looking back, I could have avoided countless one-sided discussions by doing more to repair the bridge than trying to sell her on the state of it.

When women show hesitancy to trust their husbands, men often become defensive. Although this is a natural reaction for most men, it will do little to boost a woman’s level of confidence. Men that are prone to such behavior will be wise to understand that there is a formula for rebuilding trust in a marriage. I call it change over time.

Men usually do not mind the numerator of my formula. Change is sometimes easy. It is the denominator of the equation that causes men to struggle.

When men repent or change their minds, they often change on the spot by making an about-face turn. Women, on the other hand, are vastly different in that they reverse directions by making a very slow 180 degree turn. This is often a tremendous source of frustration to men trying to woo their wives.

A Castle Around Her Heart

As we saw in the last chapter, when a woman is hurt, she will often build a castle around her heart and shut the door tight. As she hides out for safety, it is vital that the man patiently serve as he waits for her to open that door. Any signs of impatience will send out a resounding message that he is serving his fears rather than her needs. She will also be prone to perceive that he is simply using date nights, flowers, and charitable acts of kindness as a form of control to get her to conform to his wishes.

This teaching is taken from chapter 5 of our new marriage book, How to Fight for Your Marriage Without Fighting with One Another. For ordering information, be sure to visit our resource page.

56 comments on “How To Rebuild Trust In A Marriage”