The Top Mistake Couples Make In A Fight

Yep. This is exactly why most couples get absolutely nowhere when they fight. Take a look at this excerpt from our marriage book, How to Fight for Your Marriage Without Fighting With One Another, by Dr. Raymond Force. And, yes, we certainly understand that the roles are often flipped. Just be sure to read the article to the end.

When husbands and wives feel a fight coming on, both have a unique way of making battle preparations. While the man loads his cannon of logic, the woman looks to her emotions as a means of defense. It is not too long before both are involved in a battle that has raged throughout the ages between many a husband and wife. It is a battle that has produced few, if any, victors yet many casualties. 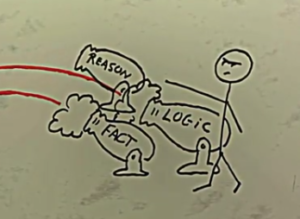 As the man fires what he deems to be reasonable statements, the woman builds a castle of emotions around herself to thwart off the attack. What happens from here is classic, yet tragic.

The man muses within himself, “To successfully storm the castle, I must shoot more cannon balls of facts and logical surmisings over this wall.”. Forgetting that logic based upon false premises is foolishness, he fires away only to have missed one of the most crucial facts of all. No man in the history of marriage has ever been able to scale the heights of that wall. For the more cannon balls of logic and reason that he tries to fire over that wall, it only grows in height and in thickness.

It is at this juncture that many men falter. They do not fail in what they are saying for their logic is fairly factual. Their failure lies more in when and how they are trying to convey their thoughts.

The Wall of Emotion is a Temporary Wall

The wise man realizes that the said wall of emotion is a temporary wall. He understands that time will erode that wall away if he chooses to serve in the moment and convince at a later time. Unfortunately, many men do the exact opposite. Instead of serving now and convincing later, many make the mistake of thinking they will serve their wife once they get everything worked out on an intellectual basis. The problem is that after 6,000 years of world history, this method has seldom proved effectual.

Proverbs 18:19 also gives us further insight on this matter as it states that “a brother offended is harder to be won than a strong city”. It goes on to say that “their contentions are like the bars of a castle”. To put it simply, the verse it teaching us that when a person’s spirit is wounded or closed, it is near impossible to gain entrance to the rest of their being.

This is key in that when a person’s spirit is closed to us, we feel that the best way to reach them is to enter through the back door of their intellect. The problem with this thought process is that Proverbs tells us otherwise. In essence, Proverbs 18:19 is telling us that a person’s spirit almost acts as a gate to their respective city. If it is closed, it is improbable that you will gain access any other way.  Therefore, in order to access someones mind, you must first open their spirit. And, this is best accomplished through sacrificial service rather than carefully constructed arguments.

This teaching will not come easy for the man or the woman that likes to deal with things in the here and now. If you are like me, when there is a problem in a relationship, you want it fixed yesterday. The only issue is that you are not married to yourself. More than likely, you are married to someone that has an entirely different way of processing their emotions and their thoughts.

Many a couple will avoid a multitude of late night arguments and free-for-alls by taking heed to this advice. Instead of stomping off and declaring the other person to be absolutely unreasonable, they will find it more effective to serve now and convince at a later time.  This usually allows time for that wall of emotion to crumble and the spirit of the other to open. Once this occurs, a spouse will usually have access to the other’s intellect.

To order our new marriage book, How to Fight for Your Marriage Without Fighting with One Another (Using a 2-step Process), which features our teaching on the Proverbs 18:19 principle, go to our Resource Page.

25 comments on “The Top Mistake Couples Make In A Fight”