When trying to solve marriage problems, it is vital that each participant use Biblical tactics.  One of the first steps that we walk women through is to lay down the sword of negativity and take hold of Biblical swords. One of those swords is the sword of thankfulness. Here are a few reasons as to why this is a vital step for women to take.

It has been said, “To whom enough is not plenty, plenty will never be enough.”. In like manner, I like to say that an unthankful heart in anyone is like a bottomless pit that can never be filled.

Some wives have passed up a number of good men in search of a storybook man or marriage. This is usually a problem as they are often chasing a mirage or something that only exists on a television screen or in a fictional book. 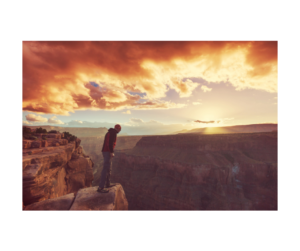 In any such case, thankfulness in a woman’s heart is key when trying to solve marriage problems as some men feel that no matter what they do or say, it is to no avail. From their perspective, they might as well be filling a bag full of holes because the reality of who they really are always seems to come short of the fantasy of what their wife wants their marriage to become.

Thankfulness in a wife has a way of filling the holes in the bag or taking the less out of that bottomless pit that I previously mentioned. It replaces that mirage with a realistic goal, and it gives the man a little more encouragement to exhibit a perfect love even in the presence of his imperfections.

Creating an Atmosphere of Growth

When a woman reacts to the negative behavior of her husband by acting cold, indifferent, sarcastic, rude, emotionally or physically absent in bed, or outright angry, her husband will seldom feel like mending his ways. If anything, he will either meet her with the same amount of anger, or the more passive man will retreat into his emotional or physical cave.

When a woman is attempting to solve marriage problems, it is vital that she learn to control what she is able to control. Many call it controlling the controllables. If this does not occur, then a woman will feel powerless and, therefore, enslaved to the negative behavior of her husband.

When a woman chooses to wield the Biblical sword of thankfulness, she is doing much more than walking in obedience to the Word of God. She is also gaining some sense of control in her marriage as she is helping to promote a climate where change has a better chance of taking place. Instead of sulking, pouting, and complaining to others about her plight, she is showing herself to be more than a victim. She is a warrior that is fighting a battle in which the outcome is not based upon her husband’s inconsistencies, but in the Providence of the Almighty God.

4 comments on “Using Thankfulness To Solve Your Marriage Problems”