How to Move Forward after an Affair

Biblical Help on How to Move Forward After an Affair

There is a reason why God said, “Thou shalt not commit adultery”. (Exodus 20:14) It is not only disobedience to His Word, but it hurts. In fact, it hurts a lot. I hope this little article on how to move forward after an affair will help some to gain a little more perspective on how to move forward from the ravaging effects of infidelity.

In this article, I will deal with the obstacles that couples should expect to face as they work at salvaging their marriage after adultery has taken place. I have found that if couples know what to expect as they work through their marital problems, they are often better equipped at handling them. 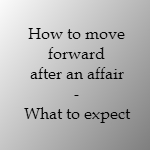 Accepting Love from the One that Hurt You

One of the most difficult things about overcoming an affair is that you must receive love from the one that hurt you in the first place.

This is one reason why husbands and wives in such a state should pray for the grace to truly forgive the other. In other words, I do not believe that we can truly forgive others without the grace of God giving us the ability to do so. And, walking over the bridge of forgiveness with a spouse after an affair will truly require God’s assistance through His Word and His Spirit. Believe me when I say that you cannot do it alone. (John 15:5)

Though some spouses may not struggle with this aspect, it is important to realize that many do. That is, the mental images of the other person, the places they met, and the things they did together often plague a spouse’s mind after an affair.

I believe this is one reason why meditation in the Word is so vital for the spouse wondering how to move forward after an affair. The Word of God has a way of renewing a person’s mind of such thoughts and replacing them with thoughts of God’s goodness and glory. (Romans 12:1-2)

Many couples throw in the marriage towel after an affair because they feel the mountain of forgiveness and reconciliation is simply too high to climb. Though I understand the way couples in such a state may be feeling, I must say that there are a number of couples that enjoy an even better marriage than ever after an affair has occurred.

This is why it is best to seek outside help as many counselors, therapists, and marriage coaches have seen couples rise above very difficult circumstances. And, quite simply, their faith in what God can do in your marriage can often be a bright and shining light for you to walk in during the beginning stages of recovery.

It is vital for couples in such a state to look more for overall growth over a long period of time rather than day to day progress. This will be key to keeping morale at a high level as the day to day results of what is taking place can often be demoralizing.