Trouble Getting Over an Affair?

Having Trouble Getting Over an Affair?

If you are having trouble getting over an affair, you already know that there are a number of obstacles to overcome. These obstacles include fear, regaining trust, dealing with mental images, the marriage bed, and unforgiveness. Let me take a few moments to deal with the issue of overcoming fear and regaining trust after an affair. 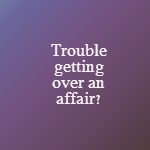 One of the reasons why spouses have trouble getting over an affair is because, after an affair, their emotions are on high alert. This is for the purpose of guarding against any future attacks on their marriage and themselves.

Emotionally, once a spouse is on high alert, they will be looking out for anything that would appear as if their spouse is still committing adultery. This is usually evident by their constant checking of phone records, questions about the day to day activity of their spouse, and ongoing investigative work.

You Would do the Same

If a thief broke into your house five nights in a row, what would be your response on the sixth, seventh, and eighth evening? Would you sleep with ease during those evenings? Of course, the answer is no.

Do Not Make these Mistakes

In situations as such, I would recommend that the offender be wary of making the following mistakes:

1. Trying to calm the fears of the other with mere words

This is covered in chapter four of our marriage book. Long conversations about why the offended should feel safe are very futile. Good behavior over over long periods of time is the best way to encourage the other to trust you once again.

2. Getting upset that the other is on high alert

If you play, you pay. It’s really that simple. And, accepting that this is just another consequence of your actions will help your situation far more than growing impatient.

3. Giving up because you feel the offended party is so hurt

This only sends out the message that life is still about you.

4. Serving the other person with hopes of that Eureka moment when they will verbalize their life-long commitment to the marriage.

This only happens on the movie screen.

If you are having trouble getting over an affair, you may want to check out our 2-step process to resolving marriage issues. This is taught in our marriage book as well as our audio series called How to Fight for Your Marriage Without Fighting with One Another.

4 comments on “Trouble Getting Over an Affair?”