The Power of Nonverbal Communication in a Marriage or Premarital Relationship

Couples often have a way of saying one thing with their words yet another with their tone of voice. This often happens by making remarks like, “Why were you late?”, “How come you did that?”, “Where are the keys?”,  or “Where did you go after work?” in a very heated manner. 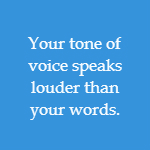 In cases as such, an honest question is asked with their words, yet a harsh statement is made with their tone of voice. Though their words ask a question, their tone of voice communicates that they have already tried, convicted, and sentenced the accused before having an ample hearing. This is always a mistake in that a spouse is not asking a question as much as conveying their anger and their frustration under the guise of a question.  Their nonverbal communication is speaking much louder than their mere words.

A Powerful Quote from Proverbs

Proverbs speaks to this matter as it states:

“He that answereth a matter before he heareth it, it is folly and shame unto him.” (Proverbs 18:13)

Emotionally, many spouses come to conclusions before they have heard all of the facts. Ergo, when they speak, their tone of voice is contradicting their words, and the conversation ends in a downward spiral.

Spouses will do well to comprehend the power of nonverbal communication in their relationship.  In our audio series and our book on marriage , we teach couples how to set up a safety fence in their conversations.  Watching the tone in which statements are made is simply one of the planks that make up this safety fence.  Other planks include ceasing from talking late into the night, avoiding sarcasm, staying away from death nail statements such as “you always” or “you never”, and sticking with the present instead of the past.