Why Couples Should Stop Playing the Blame Game

Why Nobody Wins when Couples Play the Blame Game

Nobody wins when couples play the blame game, except, of course, for divorce attorneys. Let me give you a few reasons as to why couples should stop playing the blame game. 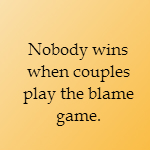 It has Never Worked

Believe it or not, but the blame game started in the garden of Eden with Adam and Eve. While Adam blamed God and his wife, the woman blamed the serpent, and couples have been following their footsteps for years. (Genesis 3:6-13)

Spouses that Make it Focus on Themselves

In my experience as a pastoral care marriage counselor and life coach, I have noticed that spouses that determine to work on their own issues first have a far better chance of making it. In fact, it is one of the key ingredients that I look for in the first few counseling or coaching sessions with couples. If this is in place, then I typically have a good chance of being able to help them.

I have found that if couples are merely focused on what the other person is doing wrong in the marriage, then my attempts at helping them are often futile. It is because of this that I cannot overemphasize the importance of couples working on their own issues first.

I stay away from what I call “He says” or “She says” sessions. This is largely due to the following reasons:

1. If the marriage counseling or coaching session is simply an extension of a couple’s arguments, then they are wasting their time as well as mine.

2. Going back to the past for the purpose of casting blame has never helped couples to move forward.

Let me give you a few scriptures that show us that it is always the scriptural perspective to focus on ourselves before the mistakes of others:

“Ponder the path of thy feet, and let all thy ways be established.”

The scriptures encourage us to ponder our own path first rather than the paths that others are taking.

Jesus is clearly teaching that if we want to truly help another person, we must first see that our own personal issues are resolved.