How To Grow Old Together

Want to learn what makes a marriage work?  Rather than simply researching books on marriage and doing online research, you may want to study the lives of those that have been married for a long time.

In one church where I served as a leader, I was blessed with the opportunity of observing the marriages of two couples in particular.  In a sense, they wrote a marriage book before my eyes. Here is what I observed:

They had Given up on Trying to Perfect One Another

They had Supernatural Power

They had a power within themselves that gave them the ability to love and enjoy one another.  Most couples struggling with anger, misuse of the tongue, and little self control need way more than will-power.  They need a Supernatural power called the Holy Spirit.

They Served the Lord Together

According to the scriptures, it is impossible for two people to grow closer to Christ and not to one another (I John 1:7).  In my estimation, this is the most important aspect of what makes a marriage work.

I often say that happy singles make happy married people. In reality, the way God has designed marriage to work is that both parties should wake up happy because of the fact that their cup of God’s favor and blessing is running over. The joy and peace that spills out of that cup should be what lands on the other person.

One of the wives that was in her eighties still used terms of like “lover” toward her husband.  In fact, it was not uncommon for us to hear her saying “lover” to get her husband’s attention while they were at church or out and about.  One night after church, we overheard her saying to her husband, “Oh what a beautiful night! It’s a night for lovers.”. 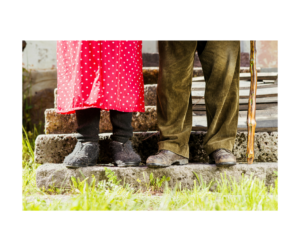 Another one of those elderly couples just celebrated their 65th wedding anniversary. I would have to say that my heart is touched when she tells me how emotional she gets when her husband picks a handful of flowers for her while checking the mail.

This all leads me to tell you of my definition of a great marriage:

“A great marriage is when two full-grown adults feel vulnerable and safe enough to let the little children within themselves come out and talk and play with one another.”

I have found that most of us are just little children in big people’s bodies. Consequently, the problem in many marriages is that when the husband and wife come out to play and talk with one another, tension soon arises. It is at that point that many husbands and wives march back into their house and slam the door shut. Conversely, some husbands and wives choose a different rout in that they stay outside, but they quickly get caught up in calling each other names, yelling, and, well, you name it.

Either way, both scenarios are extremely unproductive, and they occur because couples lack the proper relationship skills to ensure a safe and enjoyable atmosphere.

One of the tricky things about marriage is learning to act like full-grown adults so that you feel like acting like little children around each other. Though it is a difficult balance, it is nonetheless vital to learn how to do so.