What is Unconditional Love in a Marriage?

At one marriage conference that I conducted, a lady spoke up in the back and said something to the effect of, “Doesn’t all of this just get back to the golden rule.” I really could not have said it better myself. In fact, I often say that if you take everything that I say about marriage, you could sum it up in two words: be nice. 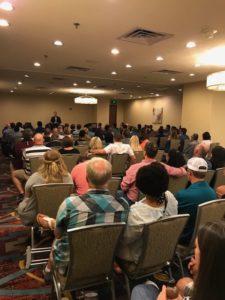 Why is it, however, that this is not enough for most people? In my opinion, the answer is fairly simple in that most human beings do not mind being cordial, kind, and nice to others. Matthew 5:46-47 bears this out. Nevertheless, where we tend to struggle as human beings is that we stop being nice when one or more of the following scenarios takes place:

1. The other person is unkind toward us.

2. The other person is acting in an unlovable fashion.

3. The other person has not measured up to our expectations in the relationship.

4. We possess but few feelings for the other individual.

5. The other person does not appreciate our love toward them.

6 We are embarrassed to be associated with the other person.

7. No matter how kind we are, the other person does not change their negative behavior.

We are a people that do not mind loving others as long as we are basicaly getting something out of it. That is, we tend to love others, including our spouse, on a conditional basis. In reality, as long as the other person in the equation does x, y, and z, then we are more than willing to be kind. However, when either x, y, or z is left out of the equation, we are tempted to stop loving them as we should, and, to be honest, according to the scriptures, this is not true love. It is a love based on self-interest.

If you have never learned to love your spouse unconditionally then the following is true about your marriage:

Your Love Will Not be Consistent

Mark it down. At some point or another, your spouse’s fraudulent activity will give you a reason to close your bank account of love. This is why no marriage can survive without patience, forgiveness, and, especially, unconditional love.

You are not Living up to your Marriage Vows

That little phrase, “for better or for worse”, is speaking of unconditional love.

You Will be Forced to Keep Score

Though couples should compromise on certain subjects, generally speaking, if both husband and wife are only willing to give in certain areas so that they can still get what they want, then their motivation to be nice is merely based on self-interest. At some point, you must give in a marriage even if you are not necessarily receiving something in return.