Spouse Will Not End an Affair

What to do When a Spouse will Not End an Affair

What is a husband or wife to do when their spouse will not end an affair? In my experience as a pastoral care counselor and a life coach, I have seen a variety of reactions. Here are four of the most common reactions: 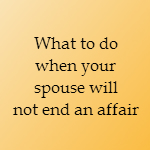 1. A spouse will sometimes show extreme signs of anger on a continual basis until they feel the affair has ended.

2. A spouse will sometimes leave if they know an affair has not ended.

3. A spouse will sometimes ask the other to leave the home.

4. A spouse will sometimes compete against the other person by using kindness, romantic acts, and sexual advances.

Out of all four of these reactions, the fourth is more common than people realize. However, I also find that it is extremely ineffective. Read on to find out why.

Some of you may know that I am also a basketball coach. At times, I will watch my players before and after practice play a game that is called 21. In this game, two or more players will compete against one another to see who can be the first to reach 21 points. It is a very interesting game to watch as sometimes you can have between 2 and 20 players competing against one another.

In a marriage, I teach couples that they should be willing to play 1-on-1, but never 21. That is, if there is another person in the equation, then all romantic and sexual activity stops! It really should be that simple.

When a spouse uses romance, acts of kindness, and sex to try to win their spouse back from the other man or woman, they will find their efforts to be futile. Here’s why:

1. The real problem is not the other woman or the other man. It is the heart of their spouse. In reality, they love their lust more than their marriage, and until this is fixed, little change will occur in the marriage.

2. If you are trying to compete against the other woman or that other man, then your spouse’s level of respect for you will go down. Though I cannot say exactly why this happens, I do notice that, 100 percent of the time, when a spouse competes against the other man or woman, they lose a certain amount of respect in the eyes of their husband or wife.

3. You should be concerned about sexually transmitted diseases. Of course, I do not speak from a medical perspective, but common sense would dictate that no sexual relations should take place until your spouse has been tested and they have ended the extra-marital affair.

At the Very Least, Become an Exalted Roommate

At the very least, when a spouse has not ended an affair, I teach people to become what I call an exalted roommate. Here is what that looks like:

1. Be courteous and kind, but abstain from sexual relations.

2. Be present and a great parent, but not a lover.

3. Unless your well-being is in danger, do not make it easy on the other person by leaving the house. Honestly, you should not be the one who is displaced and living in an uncomfortable or awkward situation.

4. Do not engage in any form of competition with the other man or woman by trying to look better than that person or out-perform them in the bedroom scene.

5. Do not wait around for your spouse to change before enjoying life. I cannot overemphasize the importance of this point. By waiting around in misery, you simply give more power and control to someone that has no idea how to handle it in the moment.

2 comments on “Spouse Will Not End an Affair”