Scriptures on Being a Good Husband

Scriptures on Being a Good Husband 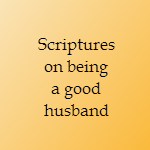 Believe it or not, but there are not an amazing amount of scriptures on being a good husband in particular. But, when God does deal with husbands, He certainly hits the proverbial nail on the head.

In our marriage book, How to Fight for Your Marriage Without Fighting with One Another, I wrote:

“The fundamental problem between husbands and wives is namely this: Husbands serve themselves or their interests more than their wives, and women try to change that behavior by using means that are less than effective.”

That said, when God deals with marriage, He goes after what I call the jugular of marriage issues. That is, He strongly exhorts the men to love their wives with as much intensity as they are prone to love themselves. Here are a few scriptures on being a good husband that validate this point.

“Husbands, love your wives, and be not bitter against them.” (King James Version)

I find that men are prone to do the exact opposite of what Paul said to do. That is, instead of loving their wives, they often serve themselves more than their wives. Consequently, as their wives respond in a negative manner, husbands tend to despise the negativity that they are receiving from their wives.

In our marriage book, we specifically deal with this issue in our first step for the men.

In I Peter, Peter says:

“Likewise, ye husbands, dwell with them according to knowledge, giving honour unto the wife, as unto the weaker vessel, and as being heirs together of the grace of life; that your prayers be not hindered.”

I love Peter’s scriptures on being a good husband because it deals with an issue that is ever present in many marriages: men criticizing their wives for their emotional and physical frailties.

The scriptures tell us that women are the weaker vessel. Of course, this does not mean that they are less in value, but it does mean that they have God-given differences. Many men, instead of loving their wives all the more in spite of these differences, tend to criticize those differences. This is always a crucial mistake.

When men start to criticize their wives for their natural differences in a marriage counseling or coaching session, I often say to them, “So, it looks like you are married to a woman.” Their response is usually classic in that they realize that they will do better to support and compliment their wives for their differences instead of criticizing them.

When dealing with sexual problems in a marriage, we often address the sexually aggressive male that is overwhelming his tired and unresponsive wife. However, it seems that we are seeing an increase in sexually passive men that are lacking a desire to pursue their wives. Believe it or not, but the scriptures deal with this also in I Corinthians 7:3-5. In this passage Paul says:

Paul plainly says that both the husband and the wife should have a giving attitude toward their spouse, even in the marriage bed.