I have recently been asked by an old friend, missionary Robert Patenaude, to give my thoughts on the subject of pastoral authority and its limits. I told him that I would love to give my responses, but I might as well kill two birds with one stone and respond in the form of a blog post.

Though this post could be very long, I will keep it short as I have numerous other obligations at this time. However, let me deal with this subject by relating a few thoughts along these lines:

The average church in America is a Christianized business with the pastor as a CEO, the deacons as board members, and the people as shareholders. Honestly, it is utterly unbiblical, and until we change this paradigm little good will come out of these discussions.

We spend an inordinate amount of time in our day trying to figure out how to force
a New Testament model into an American model. To be frank, I gave up on this a few years ago and decided to be as Biblical as possible in our church.

Our church, Crossroads Church in Ft McCoy (half of our people do not even know the name of our church), has been meeting for a little over two years. I did not set out to start a church as much as to feed hungry sheep and preach the gospel. Keep in mind, the apostles did not set out to start churches as much as they did to preach the gospel. Whatever happened after that was up to the providence of God. Read your Bible. What I am stating is true!

During these last two years, I feel that I am truly understanding pastoral authority for the first time as we have left the swamp of institutionalized and cultural Christianity. And, for the first time in my life, I feel I am in a truly New Testament setting.

I am a firm believer that the church was never made to be a machine as much as a movement by the Holy Spirit. If you try to take a movement and turn it into a machine, problems ensue. Here is the main reason why: If you try to take ownership over a move of God by institutionalizing it and making it a religious machine, at some point, a pastor will have to use hyper-control methods to keep that machine running. And, unfortunately, these forms of control will always be out of bounds with the scriptures. Here are a few of these control tactics to name a few:

If boot camp was run like a church, the soldiers would never leave boot camp. Church has become a boot camp where we have convinced people that they serve the Lord by taking care of the compound, learning about their weapons, and having meetings about how to fight. The only problem is that few church people ever leave the compound to go out and fight. This is because their pastors have found it convenient to convince them that their service to the Lord is all about keeping the compound (or the machine) running smoothly.

Having an unbiblical focus on keeping the attendance high and offerings at a certain level.

Read Revelation 2 and 3. Christ never commended or condemned the churches for a large or a small attendance. Pastors, God does not care how you measure up to your Alma mater or the church down the street. He also cares little about you being viewed as a success or a failure.

Maneuvering staff members around or cutting them loose because they fail to produce the numbers needed for the machine to continue functioning at optimum capacity.

Remember that staff member that suddenly decided the Lord was calling him to Zambia as a missionary.  More than many may realize, he was asked to feel the prompting of the Lord to go to a different place of service.

Pushing aside the leadership of the Holy Spirit for the needs of the machine.

Mark it down. In an institutionalized setting, the needs of the machine will always supersede the needs of the living organism that God calls the church. In our church setting, I finally am able to spend 100 percent of my time feeding sheep, discipling Christians, spreading the Word, and loving God. In other ministries, I have had to spend 90 percent of my time doing everything but the items previously mentioned.

The average preacher is not unbiblical by what he says as much as by what he does not say. That is, many preachers will omit certain messages and the need to deal with sin in the body because it may hurt the smooth running machine they have worked so hard to create. Pastor’s often show control by what they fail to deal with as much as by what they actually do and say.

Showing more concern for protecting his position rather than the needs of the body. 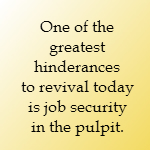 More than you know, in the confines of a pastor’s heart and mind, he is often giving more time and mental energy to protecting his paycheck rather than the glory of God. This is why I feel that job security is the greatest hinderance to revival in the modern church. God help us as we are still committing the sins of the priests in the Old Testament. Micah 3:11 states:

“The heads thereof judge for reward, and the priests thereof teach for hire, and the prophets thereof divine for money: yet will they lean upon the Lord, and say, Is not the Lord among us? none evil can come upon us.”