A vast amount of couples wonder why they were once drawn to one another, yet now they feel they are not attracted to each other. Did you know that although opposites attract, they eventually start to repel from one another? 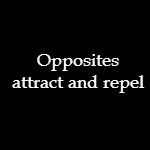 What attracts you to someone has a way of repelling you from them at a later time. This is true for all relationships, especially marriage.

Upon first meeting my wife, I noticed she possessed an inner strength that was very appealing to me. Believe it or not, after having a mere 20 minute conversation with her, I commented to one of my college mates, “I think I am going to be in a long lasting relationship with that girl, if not marriage.” My intuition proved to be accurate as we have recently celebrated twenty years of matrimony.

Not too long after returning from our honeymoon, I noticed that my wife’s strong and slightly stoic demeanor was not as attractive as I once perceived it to be.  This was because, when we had a spat, I found that it had a way of inhibiting my childish behavior, and the boyish side of me was taken aback and was not attracted to this show of power.

My wife is not an extremely verbal person. I appreciated this when we first met as I noticed I rarely had to compete for floor time during our conversations.

Be that as it may, a few years into marriage, I remember complaining that it was a rarity for my wife to freely offer compliments. I also recall pointing out that her apologies were few and far between. Interestingly enough, though my concern was over her lack of verbosity, in the beginning of our relationship, I saw this is as a plus.

I have an intense personality, and I do not like to take no for an answer. My wife, on the other hand, is different in that she is a little more laid back.

From the early days of our relationship, my wife has respected my persistence to accomplish what I set my mind to do, and she has always excelled at throwing her support my way. The only problem is that, over the years, my persistence has spilled over into other areas of my life such as the marriage bed and silly discussions about where to eat and what to do during recreational activities.

Sometimes, my tenacity can be a little overwhelming to my wife, and, to be frank, it has probably been the cause of most of our disagreements. Nevertheless, it intrigues me to see that what was probably the greatest drawing point for my wife also turned out to be one of the reasons as to why she was not attracted to me as much as before. Truly, what attracts you to someone has a way of repelling you from them at a later time.