Normal Marriage, What is it?

You probably have more of a Normal Marriage than you think

Being someone that has counseled and coached couples from all different walks of life, I have come to the conclusion that most couples struggle with basically the same issues. That is, you may be surprised to find out that you have more of a normal marriage than you think.

For some reason, once people see that their marriage struggles like the couple next door, the family that sits behind them in church, or the pastor that leads their church, they have an easier time dealing with their issues. It’s as if they now have permission to be what I would deem imperfectly normal.

I believe this is why one of the most common question I get is, “Is this normal in a marriage?” 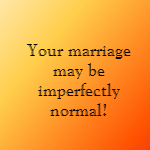 There is a great verse of scripture along these lines in I Corinthians 10:13. This passage says:

“There hath no temptation taken you but such as is common to man: but God is faithful, who will not suffer you to be tempted above that ye are able; but will with the temptation also make a way to escape, that ye may be able to bear it.”

Quite simply, Paul is teaching us that we all, in some form or fashion, struggle with many of the same issues. This is what he means when he uses the phrase “common to man”. In other words, though there are many facets to sin, as a whole, we are all in the same boat of selfishness and self-centeredeness.

In I Corinthians 7:28, Paul told us that those that marry will have fleshly troubles. He stated:

“But and if thou marry, thou hast not sinned; and if a virgin marry, she hath not sinned. Nevertheless such shall have trouble in the flesh: but I spare you.”

I believe he is telling us that the sin of self-centeredness is prevalent in everyone, therefore, both the husband and the wife will have to swim against the current of selfishness in order to have a God-filled and honoring marriage.

Even the Best of Marriages

Someone once said, “Even the best of marriages have their struggles.” I believe this to be the case, and I would recommend that every couple that finds themselves dealing with conflict in an unhealthy manner realize that they are not an oddity. In fact, they are, once again, what I would call imperfectly normal.

In my opinion, this is why a good marriage has to be deemed a great marriage. It is because not a one of us have arrived as of yet. Therefore, though we do not use these concepts to condone selfish behavior in a marriage, we certainly must mix a dose of reality in with our efforts to solve our marriage issues.