How to Survive a Loveless Marriage

How to Survive in a Loveless Marriage

It seems to be common to hear people tell me that they feel they are in a loveless marriage. Some wonder how long their time of waiting will last while others feel they are often at their breaking point.

Let me give a little Biblical, yet practical advice for those that feel they are in a loveless marriage. 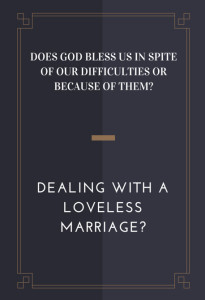 First off, I need to say that I am the armchair quarterback here. In other words, it is very common for someone to share that they have difficulties in their marriage only to be bombarded by religious platitudes or thoughtless advice from well meaning individuals. I try not to be of that sort.

However, I do want to say that the advice you are about to receive stems from my experience of dealing with multitudes of couples and individuals that have stated they are in a failing or loveless marriage. Therefore, I am not shooting off the hip when I offer this advice. The counsel you are about to receive has helped many a couple and individual to gain a better grasp of their difficult situation.

Get Out of Survival Mode

I say this because if you finish reading this article with the mindset that you are simply a victim to your circumstances, then I am not so sure you will be better equipped to handle your current situation. In other words, I often try to encourage people to realize that if they are a follower of Christ, though they may feel victimized by mankind and life and general, Christ’s disciples are always victors according to Romans 8:28 and Romans 8:35-39.

Though many are shipwrecked, they are shipwrecked on an island of God’s Sovereignty and love. This is important because if you simply view yourself as someone that has just received one bad break after another, you will always fail to have a victor’s approach. May I also say that you are out of touch with the reality of God’s care for His own.

If one will carefully read Genesis 37-50, they will find that Joseph received one bad break after another, at least from an onlooker’s perspective. But, from a heavenly viewpoint, God was using even the great difficulties he experienced to move Joseph into a position of blessing. In fact, at the end of Joseph’s life, he can be quoted as saying to his abusive brothers, “Ye thought evil against me; but God meant it unto good, to bring to pass, as it is this day, to save much people alive.” (Genesis 50:19-20) Notice, God did not bless Joseph in spite of his brothers. He blessed him because of the ill treatment he received from them. This is an all-important distinction.

Could it be that even your difficulties in marriage are being used as stepping stones instead of stumbling blocks to bring you to the Father by faith in Christ? (Ephesians 2:8-9) Could it be that what you have felt are the greatest tragedies, God intended for the greatest good? Are you aware that our greatest life messages spring from our deepest pits? (II Corinthians 1:4)

Stop Comparing Yourself to Others

The scriptures encourage us to refrain from measuring our success by the success or failure of others. II Corinthians 10:12 teaches:

If you are constantly looking at the love that some couples seem to have for one another and measuring your marriage by that standard, you may be setting yourself up for unnecessary disappointment. Here are a few reasons why it is unwise to determine the success of your marriage by comparing it to those around you:

1. You would be surprised who struggles in their marriage.

I have counseled and coached a number of couples that say that are viewed as the ideal couple in their respective churches and communities.

2. Your dysfunction may just be a little more overt than others.

All couples struggle in some way. This is why Paul said that they that marry will have trouble in the flesh. However, have you considered that though your difficulties are very apparent to you, maybe they are just as real as the difficulties others face but they are just a little better at hiding, cloaking, or controlling them.

3. We are all at different stages of growth.

Many factors need to be considered when evaluating your marriage such as what is your background, did you have viable mentorship, when did you become a Christian, et cetera. People often ask me, “Is this normal?” My answer is usually, “Whatever you are going through is normal.”

Do you see your spouse as annoying or someone that may change if they receive the proper amounts of love and patience? Your answer will determine your ability to affect them for good and patiently deal with them.

If you are a woman trying to promote change in your marriage, you may want to check out my article dealing with the sword of faith. It is an excerpt from chapter 9 in our marriage book, How to Fight for Your Marriage Without Fighting with One Another.

Our marriage book teaches couples to rise out of a pit of discouragement and fight for their marriage using weaponry that is not only Biblical, but far more effective. You may want to consider this as a resource in your quest to better handle a difficult marriage.

We can only take the chunks of coal that life offers and turn them into diamonds. I believe many a person stares at their coal and proceeds no further. There are others that believe God will bless them in spite of their coal, yet the real victors believe that God will work because of the coal that is present.

We exalt Abraham because he was a hundred when God gave him a son and Gideon because he only had 300 men. With these two men, their age and lack of men were not an obstacle but a fulcrum upon which God delighted to work. Let God do the same in your life. That is, through faith, believe that God will bless you because of not in spite of your upbringing, weaknesses, and marital difficulties.

3 comments on “How to Survive a Loveless Marriage”