Fighting For Your Marriage With Faith

If you are a woman that is fighting for your marriage, you will do well to utilize what I call Biblical swords. In our marriage book, How to Fight for Your Marriage without Fighting with One Another, I encourage ladies to lay down the sword of negativity and use the sword of faith along with other forms of Biblical weaponry. Here is a portion from our new marriage book that should prove to be helpful to ladies fighting for their marriage in a scriptural fashion.

The Sword Of Faith

As a woman learns to lay down the sword of negativity, I would also recommend that, in its place, she grasp the sword of faith. Here are a few ways in which I would suggest the accomplishing of this task:

I Corinthians 13:7 tells us that charity or true love “believeth all things” and “hopeth all things”. Quite frankly, this verse is teaching us that in order to love an unlovable person, we must learn to look beyond what we have ever known about them and toward what they can become through Divine intervention. 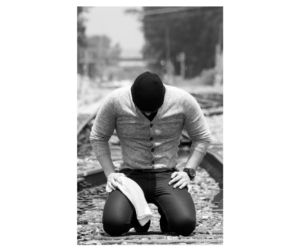 When applied to marriage, I Corinthians 13:7 is a powerful verse as it invokes a woman to look at something else besides her husband’s past and present failures. According to the verse, Biblical love will cause her to look more at the potential that he has in Christ.

In Judges 6-8, the scriptures provide for us a story about a man called Gideon. You may remember him as a great warrior and a courageous leader, but that is only because we tend to focus on the story’s ending. There was a time when Gideon seemed to fall short of exhibiting a hero’s demeanor. In verse 11 of Judges 6, the Bible gives us a look at another side of Gideon:

“And there came an angel of the Lord, and sat under an oak which was in Ophrah, that pertained unto Joash the Abiezrite: and his son Gideon threshed wheat by the winepress, to hide it from the Midianites.”

This verse has always intrigued me in that we do not see Gideon as the fearless leader that led 300 men against an army of over 135,000 soldiers. Instead, we see him as a man living in subjection to not only the Midianites, but also his fears and inhibitions.

In verse 15 of the same chapter, we find him saying this in response to the angel of the Lord:

“And he said unto him, Oh my Lord, wherewith shall I save Israel? behold, my family is poor in Manasseh, and I am the least in my father’s house.”

Once again, this is hardly the talk of a leader full of faith and courage. It is the verbiage of a man with a defeatist mindset.

Nonetheless, in these passages of scripture, we find Gideon having an encounter with a messenger from Heaven. Carefully look at the salutation of the angel of the Lord in Judges 6:12 as it gives us a glimpse of Heaven’s view of Gideon:

“And the angel of the Lord appeared unto him, and said unto him, The Lord is with thee, thou mighty man of valour.”

I have often been enamored with the angel’s greeting to Gideon as it seems to go directly against human nature. Think about it. How do we see Gideon with the evidence supplied in the book of Judges? Frankly, we see him as impoverished, insecure, and a subject to the tyrannical rule of the Midianites. On the other hand, even though Heaven sees the same, the angel looks past the obvious and into the future as he calls him a “mighty man of valour”.

If you are a wife fighting for your marriage, you could learn a great lesson from the angel in that dwelling on the obvious rarely works to help your cause. To be honest, in the long run, it does more harm than good, and a wife will probably do more to extract greatness out of her husband by practicing I Corinthians 13 love rather than what comes natural.

Before moving on, I would like to point out that this little bit of advice is not some magic potion that guarantees that your husband will eventually change. There are times when a man stays as he is. Yet, I have found that this step is not only for the man as much as it is for the woman. It has a way of positively affecting her overall attitude and feelings which will find a way of coming to the surface through her words, tone of voice, and facial expressions.

I am a firm believer that emotions are not necessarily evil in and of themselves. In fact, at some point, God desires your emotions, principles, and actions to be going in the same direction that the Holy Spirit is leading you. Once this occurs, I believe you have a winning combination, especially when fighting for your marriage.

Nevertheless, at this time, you may have very few feelings for your husband. If you find yourself in this position, I have found it vital that women learn to have faith that if they change their behavior toward their husband, their feelings will often follow suit.

I have often encouraged women to apply this principle in a very practical way by asking themselves this question: If I truly felt love for my husband today, how would I be acting? Then, I advise women to go and do according to their answer. To be honest, it is a very powerful step for women to take, and there is a sense where it must be done in faith that their feelings will eventually agree with not only their actions, but Biblical precepts.

11 comments on “Fighting For Your Marriage With Faith”