Closing the Exit Doors In Marriage

In 1903, the divorce rate was such that only 1 out of 100 marriages ended in divorce. In 2003, that rate increased to 53% (source: Dr. Carl Broggi, sermon on family issues). Though there are a myriad of reasons as to why this has transpired, we would be remiss if we did not discuss our present problem with a lack of commitment in marriage.

Previous generations in America were all about commitment. They were committed to institutions like the church, their Alma maters, the military, their places of employment, and, of course, the family unit. I have heard of stories from days gone by of men wearing suits and ties just to pick up their paychecks out of sheer respect for their employers. Those kind of days are all but forgotten. 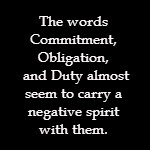 Our forefathers deemed it an honor to be committed. We view it as a hardship or something that really good people do. In my estimation, we are not necessarily good people for being dedicated as much as we are acting like grown ups.

The Importance of Commitment in Marriage

Though the words commitment, duty, and obligation almost seem to carry a negative spirit with them, they are essential to any functional home or institution. Proverbs 28:20 says:

“A faithful man shall abound with blessings . . .”

We have found it important over the years to encourage men and especially women to close the exit doors that they have set up in their minds. If not, they will find it too easy to walk through them when the going gets tough. Of course, we would never encourage someone to stay in a situation where their safety is compromised. But, in normal situations,we encourage couples to be in it to win it and understand the vital importance to commitment in marriage.

This is vital because couples will at times try to work on their marriage, but they will leave a mental door open just in case things do not work out in a timely manner. I have often seen that this is a recipe for disaster as things sometimes get worse before they get better.