How will Divorce Affect My Children, Bad Marriage

Question:  How Will Divorce Affect My Children

Marriage is the axle to which every other spoke in our society and church are connected. When it is broken, the rest of the wheel will cease to turn. One of the major spokes affected by a difficult marriage is that of parenting.   In this excerpt from our new book on marriage, we will provide some clarity for those asking the question, “How will divorce affect my children?”: 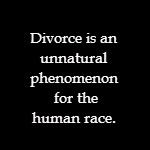 A Bad Marriage will Negatively Affect a Child’s Level of Joy and Happiness.

Look at the following quote that I found a few years ago:

“When a sample of children were asked recently in a survey what they would do if they ruled the world, they answered: ‘Ban Divorce.’.” (3.)

Divorce is an unnatural phenomenon for the human race. Before Adam and Eve fell into sin, we were created to experience nothing but the perfect love of a father and mother dwelling together in unity. Thus, anything but that will produce feelings of awkwardness, insecurity, and despair in the hearts of children.

The love and unity that husbands and wives are to have between themselves are to serve as an umbrella for the souls of their children. When parents fail to get along, this umbrella is removed and the hearts of their children are exposed to the elements of pain, suffering, and hopelessness.

​Michael Pearl said, “As the joy of the Lord is the Christian’s strength, the joy of the parent is the child’s strength.”. If this is true, then it should be of no surprise that the emotional, spiritual, and mental state of our children in general is waning in our society today.

So, for starters, to answer the question, “How will divorce affect my children”, we would have to say that there will be an emotional fallout from any type of divorce or separation between the parents.

A Troubled Marriage will Make it More Difficult for Children to Walk in a Godly Manner.

​In Malachi 2:15, the Lord speaks of the marriage covenant. In this passage, he tells us one of the many reasons as to why He instituted marriage. He says:

This is one of those passages that require little explanation. To be brief, God told the nation of Israel that He gave them the institution of marriage for the purpose of preserving a godly seed or heritage.

​Parents, if I may speak plainly, Malachi 2:15 clearly shows us that there is much more at stake than just being inconvenienced by custody issues, visitation rights, and blended family issues in general. According to Malachi, there is a direct connection between a parent’s ability to walk in unity with their spouse and their children’s propensity to walk with the Lord.