Had a great time in Flint, Michigan last week as we conducted a Christian-based marriage conference.

The venue for the conference was the Riverside Tabernacle. This particular building, according to Pastor Tom Mattiuzzo, was once featured in Time Magazine as it was one of the first church buildings of its kinds to seat thousands yet every attender was less than one hundred feet from the speaker. As you can see in the picture, it is what is called by some a fan-shaped auditorium. 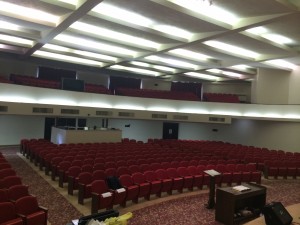 Not Feeling So Well

My wife and I were not well as we conducted this meeting. Between her being about six months pregnant and suffering from a cold and my pulled hamstring, we were operating at about half speed.

However, it must be said that whenever I am not feeling well yet have to speak, there is an adrenalin that seems to kick in while speaking. And, I could barely feel the pain in my hamstring . . . until after I was done. 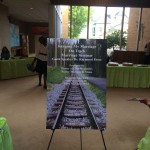 Needless to say, the plane ride on the way home was a little uncomfortable as the adrenalin from the marriage conference had worn off.