Christian Help after an Affair

Desiring Christian Help after an Affair?

Christian help after an affair is available from a variety of sources. These sources may include:

For those desiring Christian help after an affair, let me share with you a few struggles that you will have along the way.

After an affair has occurred many experience a battle within themselves. This battle comes in many forms, but it typically involves a person battling with the following thoughts:

How did this happen to me?

I thought our marriage was affair proof.

What did I do wrong in the marriage?

Was I not good enough for them?

How could they have done this?

Do I want to stay and work on the marriage?

Accepting the New Truth about Your Marriage

For some, it is extremely difficult to accept the reality of adultery occurring in their marriage. This could be because they felt that their marriage was affair proof due to their love, looks, sex-life, work in the marriage, and Christian principles.

For spouses in such a case, they will often go on a three to twelve month journey grappling with the very fact that adultery has taken place. Spouses in this state will be wise to do the following: 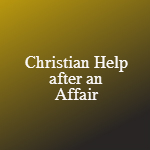 Recognize that this battle exists

Sometimes, knowing is half the battle.

Find the bottom of their bottomless pit

Some spouses will want to ask a variety of questions after an affair has occurred. When this happens, the offender will be wise to patiently answer their questions, even if they are asking the same questions over and over.

When a spouse is asking questions about the details of an affair, they are typically trying to find what I call a bottom to what they feel is a bottomless pit. At some point, many find this bottom. And, when they do, they typically are able to find some type of footing to start climbing out of the pit of hurt, anguish, despair, and unforgiveness.

For these spouses, it is okay for them to want to find out how bad the affair was. Though the offender’s temptation will be to withhold information so as to not cause any more harm, they will find this to be a mistake.

Just a little tip: Let the spouse that is on the receiving end of an affair deal with the affair on their own terms and in their own way. When you do not allow them to ask questions and find out information, you are subtlety taking the healing process out of their hands.

Accept that Their Spouse was Capable of Such an Act

Believe it or not, but when other humans fail, we feel that it brings the rest of us a little lower. Therefore, when an affair has been going on, many spouses grapple with accepting that their spouse was capable of committing the sin in the first place.

A spouse that is dealing with these emotions will be wise to look at the scriptures in Galatians 5:19 as it says:

“Now the works of the flesh are manifest, which are these; Adultery, fornication, uncleanness, lasciviousness,”

Paul is telling us that when the flesh is left unchecked, adultery can occur. Therefore, as I state in other articles, your spouse is probably not a spiritual monster or a sexually sick person as much as they are a sinner that is in need of the power of the Holy Spirit and Biblical principles.

Accept the Consequences of Adultery

When looking for Christian help after an affair, many have a difficult time accepting the consequences of infidelity. These consequences include:

The work it will take to trust their spouse again

The counseling work required to deal with their marital issues

The thoughts of the affair in their mind

Once a person is able to accept the consequences of adultery, they seem to be able to count the cost that it will take to repair the marriage. Once this occurs, the healing process is well on its way, and many couples are able to start moving forward.

Though this is just a short article for those desiring Christian help after an affair, you may want to check out our other posts on the subject. We also have a helpful resource in book or audio format called How to Fight for Your Marriage Without Fighting with One Another.