The longer I teach on our 2-step process, the more excited I become. Though I will be the first to admit that our 2-step process is far from being a magic bullet or some miracle tonic, it is simply a Biblical way to resolve marriage issues. 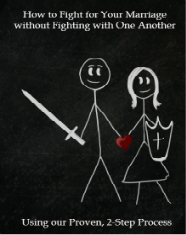 The beauty of the 2-step process is that couples suffering from all types of problems and hang-ups are able to benefit from this simple, Biblical, yet refreshing approach. Whether couples are dealing with the devastating effects of adultery, feelings of resentment, un-forgiveness, constant arguing, little communication, or a lack of sexual intimacy, we have found that this Biblical way to resolve marriage issues is more than effective.

Help for Couples Fighting for Years

It is not uncommon for us to see couples that have been struggling for 10, 20, and 30 years make tremendous progress after just a few short weeks of implementing our teachings. Here are a few examples of how the Lord has used our teachings on marriage and relationships:

When I think of many of our success stories, I think of the couple that had been married for 21 years that could never seem to get it right. Even though they were church-going people, they could never see eye to eye about the finances, physical intimacy, or the children.

After about two sessions, it was a classic case. Though I had more faith in their marriage than they had, after a few short weeks, they started to see bonafide results. Not too long after, their confidence level seemed to match mine as they experienced a renewed faith in the Lord and one another. To my knowledge, they are still enjoying a great relationship today.

I also think of the couple that had only been married for just a few short months that was already starting to experience difficulties. Upon first calling us, they were embarrassed to admit that they were already having issues. But, after implementing just a few simple steps (along with our teachings on the Top Mistake that Men Make in a Fight), they were well on their way to enjoying the relationship God had intended.

When thinking of success stories, I also recall the many couples that have been to numerous counselors and therapists, yet to no avail. This may seem a little odd, but we are always excited when couples use our teachings as a last ditch effort. This is because, by that time, they are typically very good listeners with very little pride in the way. And, in many of these cases, we end up rejoicing with the couples as they start to see results that they never imagined were possible.

Of course, we have lost a few couples throughout the years as we cannot do more than God can in a marriage. But, I find that many couples really do want their marriage to excel, yet they seem to be overlooking just a few wisdom points.

The book of Proverbs tells us that when we stumble, we are often unaware of the cause of our issues although we are certain of the effect (Proverbs 4:19). In most troubled marriages, the same is true in that many have tried and tried to overcome their marital issues, but they seem to be overlooking a few minor points that have a way of causing tremendous difficulties.

Our teachings on marriage are designed to show couples why they have tried and tried, yet they keep failing at overcoming certain obstacles in their marriage. Our coaching is geared toward giving couples a very different outlook on the same old problems that have plagued their marriage for years.

In fact, take a look at these testimonials from our marriage and family conferences. We are happy to say that these are very classic responses to our teachings on the Biblical way to resolve marriage issues:

“Everyone was grabbing each other out in the hallways after Raymond spoke and talking about what they had learned . . .”

“We enjoyed ourselves more than you could imagine. Everyone was talking about how they had learned things that they had never seen before.”

I would encourage our readers that have lost all faith in their marriage to understand that there is a better way and, consequently, a better day in their marriage. Though we make no guarantees, I would like to invite some, at the very least, to take a serious look at our Audio Teachings on our 2-step process.

Click Here for More Information about our Immediate Download as well as our Audio CD series on How to Fight for Your Marriage Without Fighting with One Another.