Biblical Roles in Marriage, Why Football is so Popular

More and more, America is turning into a matriarchal society where the strong aggressive male is being supplanted by the more domineering female. Though some may say, “What is wrong with this?”, I would have to point out that it contradicts God-ordained norms and principles that have been in existence for thousands of years. And, any time a society moves away from Biblical roles in marriage, disaster looms (Proverbs 14:34).

All aggressive behavior is not sinful behavior. In the book of Mark 3, Christ is seen chasing out the money changers in the temple with a whip. In I Samuel 17, David is found defeating a giant called Goliath. Other scriptures show Samson winning battles with basically his bare hands, Paul forcefully contending for the gospel, and saints riding into battles on white horses. Though all of these examples manifest actions that are more aggressive in nature, they were, nonetheless, God ordained.

Why Football is So Popular

I have a theory as to why NFL and College football are so popular in our day. I believe it is the one place that men can still show aggressive behavior while crowds of people still cheer for them. 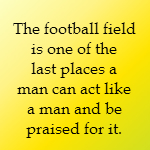 I often like to remind ladies that they married a man, and to expect anything less than masculine behavior from a man defies logic as well as Biblical precepts.

Of course, the Biblical husband will have a balance between showing strength and gentleness. A Biblical male does not have to demand respect because he has earned it. And, He imitates Christ in that he is able to protect as well as comfort and care for his bride. This too must be understood when considering Biblical roles in marriage. However, keep in mind, little girls do not dream of being a princess that storms a castle to rescue a prince. They dream of the opposite. Their minds naturally conjure up thoughts of a strong male figure storming a castle and rescuing them from their plight.

Same Rules Do Not Seem to Apply

All that being said, it should be noted that men and women do not seem to play by the same rules today. In other words, when a male is too aggressive, he is considered controlling, whereas, when a woman is forceful she is assertive. When a man craves physical intimacy he is called a pervert or one with too high of a sex drive. When a woman desires more physical intimacy it is because she craves affection and closeness. If a man says that he is hurt, he looked upon as being a big baby, however, if a woman states that she is hurt, she is considered a victim. 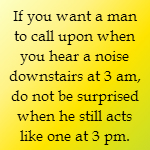 It seems to me that some women as well as society in general cannot have their cake and eat it too. If you want a man that will protect and fight for you, you may have to put up with a few other masculine tendencies. If you desire a man that you can call upon at 3 am upon hearing a noise downstairs, don’t be surprised when he still acts like one at 3 pm.