Advice for the Dominant Woman Married to a Passive Husband

Verbalizing heart issues is often a difficult task. In trying to help the masses, there are some couples whose paradigm is slightly different from most. For this reason, I would like to address an exception to our article about the Proverbs 18:19 principle, and it involves the passive man married to a more dominant wife. 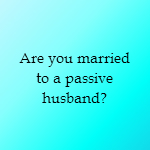 Married to a Passive Husband?

Much of our counseling on marriage seems to deal with the aggressive male that is so into himself that he fails to stay in touch with the emotional needs of his delicate wife. Though this is certainly worth addressing, some couples have what I would call a role reversal in that it is the wife that is more aggressive in nature in comparison to her more passive husband.

For marriages in such a state, it should be noted that the woman can often be just as guilty as the man when it comes to using logic and reason to penetrate walls of emotion (This is discussed in greater detail in our article about the Proverbs 18:19 principle.). As the wife verbalizes what she deems to be very logical statements about the past, the husband will often run for cover in what I call an emotional or physical cave. Couples that find themselves in this scenario will do well to apply many of the same rules as previously mentioned in our article about the Proverbs 18:19 principle, yet with a few considerations:

Serve by Showing Up for Conversation

In the context of an argument, I usually stress that men serve in the moment and convince at a later time. However, the more passive husband may need to serve his wife by showing up for conversation. In these situations, ninety percent of success for the male is usually showing up for the talks that the wife desires to have. Bear in mind, however, these talks should never take place in an emotionally charged atmosphere.

Backing into a Corner

Usually the more passive male is married to a woman that is far superior at articulating her thoughts. Men married to women as such often feel verbally backed into a corner during fights and arguments. The wise woman in this type of a marriage should be careful to to talk to her husband in a way that does not make him feel demeaned or less like a man.