Avoiding Arguments in a Marriage

There is a better way to go about avoiding arguments in a marriage. Rather than just working hard to hold your tongue, there is actually a way to replace those feelings of anger and frustration with a spirit of thankfulness for the other person. Carefully read as Dr. Force gives a portion of our 2-step process to solving marriage issues.

The Cold Versus the Snow

When speaking on marriage, I share what seems to be a rather obscure expression regarding the differences between husbands and wives. Though its meaning is slightly allusive at first, most find it to be extremely beneficial as they discover its meaning. 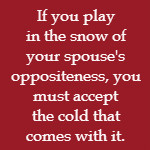 It is hypocritical to play in the snow of your spouse’s oppositeness five days out of the week, yet complain about the cold that comes with it on the sixth day.

To clarify, this means that it is a double standard to enjoy the benefits of your spouse’s oppositeness on one day, yet become critical or argumentative when you perceive that same attribute to be working against you on another day.

I have already mentioned that my wife has a deep inner strength. Along with that, she is not loud, nor is she very flamboyant. She is what I call a “stable mable”.

I, on the other hand, am her exact opposite in that I am not a “steady eddy”. I can be up one day and feeling a little down the next.

Honestly, I have played in the snow of my wife being an emotionally stable person for many years in that she has served as an emotional anchor in our home. I may go up and down, but she is usually very even-keeled. In fact, we have a little saying around the home that states that mom is not allowed to have a bad day. The rest of us may be all over the place, but the case must not be so with mother.

For years, my wife has helped to keep my feet on the ground and my head above the emotional waters by her mere steadfastness. I have, indeed, played heartily in that snow.

On the other hand, every now and then, I start to feel the cold that has a way of accompanying that snow. That is, sometimes, I have big plans and wishes that I verbalize to my wife. It may be concerning business, the church, or pleasurable activities, and I usually come to her anticipating that she will be just as excited as I am.

The only problem, if you wish to call that, is that “stable mables” do not do back flips upon hearing about new ideas and endeavors. Normally, they ponder them in their hearts for long periods of time before making any decisions or throwing their support toward a cause.

It is at this time that conflict could ensue for my wife and I. This is because although I have been playing in the snow of her steadfastness for most of my marriage, at this point, I could easily start to feel the cold that has a way of accompanying the snow of her being a “stable mable”. If I do not make the right move, then I will fail to progress in the area of avoiding arguments in a marriage.

In the early days of our marriage, I would share new ideas with my wife with the expectation that she would jump on board with reckless abandon upon hearing my grand ideas. To my chagrin, I would be met with kind nods and thoughtful expressions, but not the emotion that I desired. It was not too long into those conversations that I would start to accuse my wife of lacking faith and vision for the future. I would be sure to relate to her that successful people have to constantly be looking for new mountains to climb and sitting back and doing nothing would do little to move us forward.

It was Not Her Fault

Looking back, I can see that my wife did not lack faith, vision, or an ability to be forward thinking. She simply had a different way of processing new ideas, and a different approach was not necessarily a bad approach. It was just different, and a proper understanding of this could have greatly enhanced my knowledge on avoiding arguments in a marriage.

As you can see, I had a problem in the area of thankfulness. What I needed to do was to catch myself and say something within like, “It is hypocritical to go negative on my wife because she is not falling down in awe of my new ideas. From an emotional level, she is very steady, and I have benefited from this in many ways throughout my marriage. Right now, I need to accept that this is all part of the package of being married to someone that is not as prone to emotional highs and lows as myself.”.

I’m a Spender, She’s a Saver

My wife is a natural saver. I am a natural spender. Believe me when I say that I have played in the snow of her being a saver for years.

Some years ago, we planted a new church in Pennsylvania. During that time, we lived on love because there was scarcely anything but love in our home.

Needless to say, during that time, I played in the snow of my wife being a saver in that she is the queen of frugality. I do not know how she does it, but she is one of those women that has a knack for taking ten cents and turning it into ten dollars.

My wife, Melody, shops at yard sales, buys in bulk, and has mastered the art of couponing. Her middle name is Beth, but I think it could be be Bogo.

Once again, I have played in the snow of Melody’s oppositeness for years, yet there are times when the spender in me on a Friday evening jumps to my feet and says, “Let’s all go out and get some hot chocolate!”.

As all the children run to their rooms to find their shoes while singing my praises, the saver in my wife starts to come out as she calculates the cost. It is at that point that the saver and the spender could start to butt heads if care is not taken.

This is the point where arguments start for many couples. But, I have found that a simple attitude of gratitude goes a long way in these situations (Philippians 4:8).

In my case, it is unbelievably helpful in avoiding arguments in a marriage to say within myself, “I have played in the snow of Melody’s frugality for years. If I start to get snippy or tense, then it is hypocritical for me to enjoy the benefits of her frugality for most of the week and then become childish in my behavior when I perceive that I am not getting what I want.”.