Feel Taken for Granted by Your Husband or Your Wife?

At the heart of many fights between husbands and wives is the simple fact that many spouses feel taken for granted. As a pastoral care counselor and a Christian life coach, I have found that a simple attitude of gratitude can go a long way between couples to alleviate many a fight.

Here is part two of a previous article on learning how to acknowledge and appreciate the differences between you and your spouse. We find this is a very powerful step in avoiding fights between husbands and wives.

Learn to Categorize 80 to 90 Percent of Your Fights

I find that having a little check in your spirit that acknowledges and appreciates the differences in your spouse is very powerful. For some reason, it has a way of keeping our anger and our frustration at bay, and it allows couples to avoid 80 to 90 percent of their previous arguments. It is also a great tonic for marriages where one person in particular feels taken for granted. 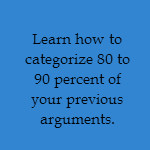 I am a problem solver. By itself, it is a tremendous quality to possess as it helps me to be extremely focused when counseling, coaching, and rebuilding things that are falling apart.

Notwithstanding, the problem is that people like me tend to be critically minded. As a matter of fact, if you were to show me a wall that you painted, I would notice the one place where you missed a spot or had a run. It is just how my mind naturally works.

For years, my wife has played in the snow of my problem solving abilities in that it has allowed me to make a living for the family. As a pastor, life coach, and a speaker on issues of vital importance, I utilize my problem solving abilities on a daily basis. The only trouble is that there is a cold that comes with this snow. That is, there are times when I over analyze my family or try to solve too many problems around the home rather than overlook issues that are of less importance.

During some of these moments, it is helpful for my wife to remember that before she confronts my imbalance she should be thankful for the snow that accompanies this cold. In other words, it helps to keep a spirit of anger and frustration in check when she says to herself, “Most of the time, I play in the snow of his problem solving abilities, and, though I will address this issue, I will be calm as it is hypocritical of me not to accept that this is the cold that accompanies this snow.”.

Problems in a Marriage Still Need to be Addressed

Of course, this principle does not negate the fact that some issues need to be addressed. It would be absurd to assert that. But, I do find that acknowledging and appreciating the snow that accompanies the cold or the positive elements that come with the negative help to keep couples calm when dealing with one another. It seems like such a small tweak, but I am finding this step to be ever so powerful, especially for the spouse that feels taken for granted. 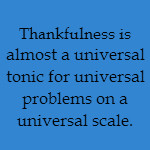 After years of studying the Bible and learning how to counsel couples in need, I have found that thankfulness is almost a universal tonic for universal problems on a universal scale. This is one of the major reasons as to why it is such a vital part of what we call our 2-step process to learning how to deal with your issues as a couple.