Alcohol and Adultery, I Peter 5:8

Alcohol and Adultery – Is there a Connection?

Being a pastoral care counselor and a marriage coach, I have assisted multitudes of couples through the devastating effects of adultery. Though alcohol is not always involved in adulterous relationships, it should be noted that I have had many a man and woman tell me that alcohol contributed to their lack of ability to resist temptation. For this reason, I want to give you a few thoughts about alcohol and adultery.

The problem I have with alcohol is that it numbs the senses. That is, it has a way of taking the edge off of the blade of discernment in our hearts and minds. And, whenever this occurs, I feel any man or woman is in a dangerous position.

“Be sober, be vigilant; because your adversary the devil, as a roaring lion, walketh about, seeking whom he may devour:”

The problem with any type of mood altering drugs or alcohol is that it takes away our spiritual keenness and awareness. It puts the guardsmen of our hearts asleep, and, once this happens, we are vulnerable to the wily attacks of the enemy.

Anyone who works with couples has heard all the stories of men and women that admit that they may not have committed adultery if it were not for alcohol. They have heard the cries and seen the shameful looks of husbands and wives that freely admit that apart from the numbing effects of alcohol, they probably would have been strong enough to say no to temptation. 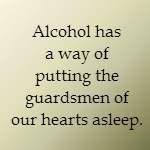 I am a t-totaler for a number of reasons. But, I must say that the more I counsel couples and individuals, I gain an utter disgust for alcohol and its devastating effects. This is often because alcohol and adultery often seem to go hand in hand.

I Can Handle It

I often hear people say, “I have self control.” I always view that to be an interesting statement in that they are purporting that they have self control over something that diminishes self control. So the problem is that even if a person has great will power, while they are drinking alcohol, they are losing the very attribute that they say they need in order to stay in a safety zone.