The Main Reason Why Some Couples Don’t Make It 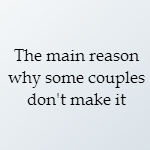 Why do some couples make it while others divorce? Let me give you what I find to be the biggest reason why some couples don’t make it.

An Inability to Stay Within a Safety Fence

In chapter 11 of our marriage book, I set up what I call a safety fence for couples. This safety fence teaches couples when they are entering into a dangerous area in communication. If couples fail to stay within this safety fence, they will hurt their relationship and fast-forward the destruction of their marriage.

I cannot overemphasize the importance of couples learning the planks of the safety fence that we teach. In fact, this is why I call them the 10 commandments of our marriage coaching and counseling. This is because I have found that couples that stay within the confines of this fence make it. It is really that simple, and I like simple because major truth is always simple.

Are You and Your Spouse Forgetful Hearers

“But be ye doers of the word, and not hearers only, deceiving your own selves. For if any be a hearer of the word, and not a doer, he is like unto a man beholding his natural face in a glass: For he beholdeth himself, and goeth his way, and straightway forgetteth what manner of man he was.

But whoso looketh into the perfect law of liberty, and continueth therein, he being not a forgetful hearer, but a doer of the work, this man shall be blessed in his deed. If any man among you seem to be religious, and bridleth not his tongue, but deceiveth his own heart, this man’s religion is vain.”

I believe these verses are applicable in that the scriptures use the phrase “forgetful hearer”.

I have found that one of the key characteristics of couples that don’t make it is that they quickly forget all they have learned when in the middle of a disagreement. In fact, they often act as if they have never been taught any good counseling advice. I often marvel at couples in such a state in that I wonder why they even pay good money for good advice if they are going to simply exhibit bad behavior.

All the Counseling in the World

The Planks of the Safety Fence

Though we explain the planks of the safety fence in further detail in our marriage book, these include no yelling, sticking with the facts, asking honest questions, ceasing from coming to an emotional conclusion before looking at all the facts, ceasing from bullying through questioning, and not arguing late into the night.

For a complete list and explanation of our safety fence, be sure to check out our new marriage book, How to Fight for Your Marriage Without Fighting with One Another.