When You are the Only One Working on the Marriage

I often receive the question, “Is there hope for my marriage even if I am the only one working on the marriage?” Let me take a few moments to provide some help for those that feel they are a lone ranger of sorts in their marriage.

The Two Types of Spouses 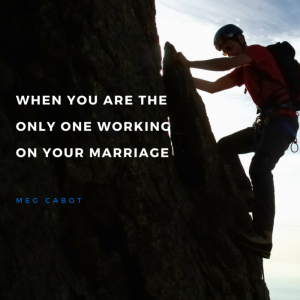 If you are reading this article, then you are probably the one that will change no matter what the other person does. If this is the case, then you may be more of a power broker in your relationship than you realize. However, it is important to realize that if you are both waiting for the other to change before making the right maneuvers, then you may both be waiting for a long time. In essence, your marriage will be in what I call trench warfare.

Do Not Be Fooled

Do not be fooled by the spouse that acts as if they could care less what changes you make. You may feel they are in control, but, more than you know, they may be more of a responder than you realize.

Keep in mind, what most people give off that they are the most is what they are the least. And, the spouse that acts as if they are Mr. or Mrs. Independent is usually the one that is everything but that. In other words, you may be married to someone that I would call an amazing contradiction.

Do Not Allow Yourself to be Emotionally Imprisoned

If you are the spouse that will change no matter what the other person does, then it is unbelievably vital that you not allow your spirit of joy, peace, and confidence to be dictated by the other person’s actions. For some reason, when this occurs, it has a way impeding growth in the marriage. Here are a few possible reasons for this:

1. Crying Out for Help

Personally, I believe that many spouses in this case are looking for someone strong enough and wise enough to pull them outside of themselves. In a sense, they are often looking for someone that is able to do the job that their parents failed to do.
When you allow a spouse in such a case to dictate your level of confidence and joy, it sends out a subtle message that yet another person is too weak to do the job.

2. A Sense of Control

Other spouses relish in the control that they gain when they can keep those around them in a state of misery. Believe it or not, but some will struggle with relinquishing that sense of control.

Keep in mind, when you allow someone to control your happiness, you are placing yourself in an emotional prison and handing the key over to the other person. And, once again, many a spouse becomes quite comfortable with that sense of power.

In chapter 1 and 6 of our marriage book, I discuss the importance of breaking out of this emotional prison. If this does not occur, then I find that all the changes in the world will only go so far.

There are two primary areas where we encourage change. These areas include the following:

The scriptures teach that we are just as responsible for the way we react to dysfunctional behavior as the person that commits the original relational crime. These scriptures include I Peter 2:23, Romans 12:17, and Proverbs 25:21.

I Peter 2:21-23 – “For even hereunto were ye called: because Christ also suffered for us, leaving us an example, that ye should follow his steps: Who did no sin, neither was guile found in his mouth: Who, when he was reviled, reviled not again; when he suffered, he threatened not; but committed himself to him that judgeth righteously:”

Romans 12:17 – “Recompense to no man evil for evil. Provide things honest in the sight of all men.”

Proverbs 25:21 – “If thine enemy be hungry, give him bread to eat; and if he be thirsty, give him water to drink:”

In our coaching and our marriage book, we teach couples how to lay aside behavior that does very little to glorify God and pick up weaponry that will help to promote viable change in their relationship.

Mark it down, the way you are tempted to initially react to your spouse’s dysfunctional behavior is almost always counterproductive. God’s ways almost always lead us in a way that is contrary to the stream of emotions that flow when conflict arises.

Your spouse is a spirit being, and if you fail to affect this area, then you will certainly fall short of affecting them for the highest good. We teach this in chapter 4 of our marriage book.

In our coaching and our marriage material, we teach couples how to better affect the spirit of their spouse rather than simply their mind. This characteristic of our marriage and relationship coaching may be our most defining element as to why our coaching is effective.

Know It’s Been Done Before

Though I am a huge proponent of doing what I call burying the seed of expectation, it may encourage you to know that the lone ranger or solo method has worked before. That is, I have seen a very good number of individuals promote change in their relationship even when they are the only one that is willing to make the first move.

Once again, there are those that will change no matter what, and there are those that will only change once the other has changed. More than likely, you are the one that must take the first few steps. However, do it in faith and out of obedience to your marriage vows, and you may find that the ghosts that life has sent your way that scare you into feeling hopeless are just that . . . ghosts. That is, they may be dark clouds without rain, and your propensity to walk in faith though you scarcely see the benefit may be the catalyst for your faith to become sight.

“Lord, help our readers to be followers of that which is good, knowing that you hold the reward in their hand, not their spouse.”