Why Men Are Protesting

I am finding more and more men that are just plain frustrated, and their frustration appears to have some semblance of validity.

Quite simply, many men seem to be lining up in protest against what they feel is an uneven patch on the battle ground of relationships. 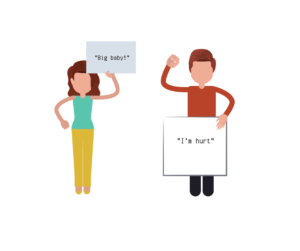 One man told me that he feels like women hold so much power that they seem to not only hold the key to the rooster house, but they are also at the window wearing a fox mask. I would have to agree if you consider the matter in this light:

Obviously, these are generalities that do not apply to every marriage, but I would say that when I share these imbalances with audiences and clients, they rarely seem to give me much push back.

How We Ended Up In Such A Place

Quite simply, women started taking a control that they would rather surrender about 50 years ago when men stopped acting like men.

To be honest, with the breakdown of the American home, the use of external substances such as alcohol and drugs, laziness, the rise of pornography, and a general lack of wisdom, men were dethroned from their normal roles of leadership. Consequently, women are left with a control that they actually resent if they will be honest. They are left clinging to the castle walls while all along daring the men in their lives for a dangerous rescue from the out-of-balance paradigm in which many have found themselves.

What Are We To Do

The scriptures talk about a day in which a society will be without natural affection. In fact, we are not in danger of coming to such a place as much as we have already arrived. (II Timothy 3:3)

The problem now is that even some while reading this article will call the good in this article evil, while others will assert their own tainted ideology as good. (Isaiah 5:20)

Nevertheless, for those with a willingness to listen to a message that is bolstered by scriptures, the example that Christ, the church’s groomsmen set, and human nature, I have a few words to say:

Women will resist the change they really want

In the same way, as mentioned in our marriage book in chapter 9, a woman will often retreat behind a battle line of emotion and fall on her own sword of negativity, all the while complaining because the man fails to come to her aid.

The wise man will push through the abnormal ideology of our day with wisdom and unconditional love. He will not allow the woman’s responsiveness or lack thereof to deter him from his duty of loving his wife. He will keep pursuing because it is right, not because it simply yields a result.

There is nothing wrong with a woman being assertive in a marriage. There is an issue with her being demeaning, but there is no harm in the husband being secure enough to allow the strength of his wife to blossom in the field of love he tills.

Many seem to vacillate between extremes when it comes to which way to follow. Some think that a godly wife will sit down, shut up and hold on for the ride. That is not the picture painted in Proverbs 31, nor is it the portrait painted by the Christ-church relationship.

Others seem to lean toward a woman acting like the mom in a marriage while the man is patronized by the woman as she allows him to play in his man cave and outside with his expensive toys.

I say that a Biblical marriage requires a balance between the man acting like a man and a husband showing his security in Christ by being comfortable with the strength of a godly woman around him.

Honestly, many men tell me that they do not even know what a godly example of a husband looks like. This is why I am proposing that men develop an addiction in their life that is far better than sports, themselves, and external substances. I am encouraging men to be addicted to the presence of God. (Psalm 16:11 and John 14:21-23)

God is the perfect example of balance. He is stern and the very definition of strength. But, He uses that strength to cover his bride, the church.

I am convinced that only a deep and intentional fellowship with the Father will allow His image to re-imprint the dysfunction that some of our earthly fathers imprinted upon our souls. This is why above all else, I encourage conference attendees, coaching clients and church members to seek the Lord as if their life depended on it, because it does.

To learn more about our Biblical approach to strengthening marriages, order our marriage book, How to Fight For Your Marriage Without Fighting With One Another.

4 comments on “Why Men Are Protesting”