There are a number of things that I could say in this article about unforgiveness in marriage. However, I would like to just relay a few points that I shared with our congregation this last Sunday. 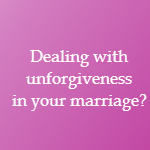 The Worst Kind of Unforgiveness is the Most Subtle Kind

The worst kind of anger, unforgiveness, rage, hurt, and bitterness is the most subtle kind. That is, it is not the man or woman that is throwing outrageous fits that is typically the hardest to help. It is the spouse with a form of unforgiveness that is almost undetectable to the average person that proves to be the most difficult.

How Many Cloak their Unforgiveness

I often hear people say that they have forgiven their spouse, yet they struggle in being friendly with them, loving them unconditionally, or speaking nicely about them. When this occurs, I often say to myself, “If that’s forgiveness, I’d hate to see unforgiveness.”

Also, when speaking on forgiveness, I typically find that half of the crowd tunes me out once I announce the title. This is because most feel that they have a forgiving spirit toward those that have hurt them. However, I usually find that about 10 minutes into my messages on forgiveness the other half allows me to pull them back into the conversation as unforgiveness takes on many shapes and sizes.

Here are some subtle ways that many seem to cloak their unforgiveness in marriage:

1. By playing it uber safe in regards to opening up and pursuing a deeper relationship with their spouse.

2. By perpetually stonewalling their spouse, especially when times seem to be getting better.

3. By moving the target even when the other seems to be making the right changes in the marriage.

4. By setting goals in the marriage that are almost unreachable by most.

5. By exhibiting a spirit of hopelessness that the marriage will ever change even in the face of definite progress.

6. By looking at the future with a spirit of hopelessness that the marriage will ever get better.

7. By not considering every option that is available to them when it comes to fixing the marriage.

8. By complaining about their spouse even when they are the ideal spouse. (I have had some tell me that they feel that if they could walk on water, their spouse would still complain that their feet are wet.)

9. By saying that they need time to heal before they can move forward. Though this is, at time, true, it can also be used as an excuse by some.