Three Years Ago This Month, Everything Changed For My Family

Three years ago today, everything changed. We were riding down the road, minding our own business, and playing by the rules.

Two days before that, I spoke on marriage in Williamston, NC, and my little Grace sang He Looked Beyond My Faults And Saw My Need. From there we traveled to Northeast, MD and conducted a wedding ceremony which concluded about 5 pm on Friday, May 20th.

Since we had friends at the wedding, we stayed up very late on Friday evening talking, laughing, and reminiscing. It was a great time of connection between our family and our friends from years gone by. 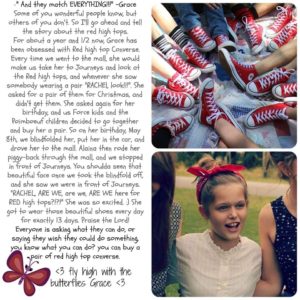 I think we retired to our hotel room around 12 or 12:30 am. Since it was so late, I decided not to set an alarm clock which usually means that we would sleep in until about 8 am and arrive home extremely late after a very long ride back to Florida. However, for some reason, at about 3:45 am, I woke up, sat up straight, and told everyone that it was time to go.

I have often looked back on how I woke up at such an early time. That was highly unusual for me. But, it is also interesting because if I would have woken up a second before or one second after, I probably would never be writing about the events of that day.

As we traveled down I-75, we commented to one another about how light the traffic was. It was about 5:30 pm, and very few cars were on the road. However, about 5:45 pm, as we crossed the Florida-Georgia line, everything changed as we were hit from the rear. I will spare the details. You should only know of the result. We lost our 12 year old girl, Grace Evangeline, and my daughter, Mary, had a severe laceration on her face.

After seventy plus stitches, Mary is as beautiful as ever, but our hearts are still extremely heavy to this day after losing our precious Grace.

When my wife and I first watched the movie Courageous, we said that when the movie starts to make allusions toward the little girl dying in a car crash, we both thought that certainly the script will not go there. Of course, we know how the movie turns out. However, it is one thing to watch the movie, it is another to live it.

After three years, here are some lessons we have learned. We hope this helps someone today dealing with tragic pain and loss as we have, by default, developed a new platform in life, the platform of pain.

We Own Nothing In Life

Grace was not ours. She was and is God’s.

God blessed us with Grace for twelve incredible years. After that, we had a choice: cling to something or someone that is not ours to begin with or live life with a loose grip on that which God said is temporary anyway.

Faith is releasing control of what we had no control over in the first place. Lord, help our readers to release the control today that they were never created to have.

We Are Thankful For A Very Deep Foundation In Christ

When we were newlyweds saying our vows, we had no idea of all the many battles we would face together as a couple. We also had no idea of how valuable the many hours of meditation in the Word would prove to be in years to come.

My wife and I have buried two children. I am 45 and she is 44. By this age, we never would have imagined that our plight together would involve two funerals of our own children. However, if I read Matthew 7 correctly, I find that the house Christ mentioned does not stand because of the strength of the house, but the strength of the foundation on which it stands.

Honestly, without this foundation, I have no idea how we would be in tact as a family today. That is, the many hours of reading the Bible, applying the Bible, and conversing about the Bible have formed a foundation that is crucial to our mental and emotional well-being.

To be frank, some of you have no idea what is coming down the pike. Your future may include loss, death, or some type of unexpected tragedy. The time to prepare for these unexpected storms is now.

I honestly have no idea how some of you men can face the future without laying this foundation. Your mediocre approach to God is hardly a gamble as much as it is a kamikaze mission as Christ has said that the storms will come.

The question is are you laying a deep foundation on which your house can stand? If not, your omission now will lead to errors of commision later as when a tragedy occurs everyone goes to their defaults. By long experience, our default was to look to the Father. But, with many, it will be to look to their anger, blame, substances, or escapism.

The Greatest Truth Of The Bible Is That God Is Good

Nobody curses and quotes Romans 8:28 in the same sentence. When we fall away from God, it is because we do not truly believe that He is good.

Certainly, my wife and I understand that life sometimes sends out the message that life and even God is cruel. However, like Job, all I can say is that if He slays me, I will still trust. In modern day vernacular, that could be worded, “Bring it on, but I will still believe that God is good, And, I will show my trust by my works and keep obeying my Lord. To whom else will I go. He has the Words of Life.”

One comment on “Three Years Ago This Month, Everything Changed For My Family”