Stupid Phrases in Sports that Need to be Tossed!

Stupid Phrases in Sports that Need to be Tossed! 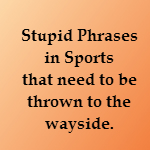 Being a basketball coach, I have come to view sports much differently than the average fan.  In my opinion, there are a vast amount of ridiculous statements made about sports that have become widely accepted as very reasonable statements. However, I must say that I tire of hearing them.

Here are some just to name a few:

They didn’t come to Play

As an athlete and a coach, I have seen countless teams prepare beyond measure only to have nothing fall in line during the game.  Case and point, I refuse to believe that Peyton Manning was not prepared for the Super Bowl in 2014.  I refuse to believe that he did not put his all into preparing for that game.  However, there are nights when everything falls the other teams way no matter how prepared a person or the entire team is.

The Other Team Wanted it More

Though I am sure there are times when this occurs, I have watched many of the teams I coach leave everything on the floor only to come up short at the end of the game.

In high school, I was a 6 foot guard that played in a pretty tough conference in southern Illinois.  I am here to say that if another team is bigger, faster, and more talented, desire alone is not enough.  Like my dad says, “You cannot teach 6’6″ and quick.”

Look at players like Jimmer Fredette that average 3.2 ppg in the NBA yet scored about 28.9 ppg at BYU.  Does he lack desire or shooting ability?  Honestly, some of the greatest shooters in the world are working at Enterprise right now saying, “Yes,  we take Visa.”.  This is not because of a lack of desire or raw ability as much as a lack of height and quickness.

Get Your Head in the Game

Last time I checked, a game is a game, and the primary purpose of a game is to have fun.  So, unless you are paying for your education or making millions of dollars, give a perfect effort, but don’t forget that a game is a game.  And, games are supposed to be fun.

Even Tony Dungy said that at the beginning of a game they do happen to say, “PLAY ball!”

On the movie Chariots of Fire, a well known running coach says,”You can’t get out what God hasn’t put in.”  Truer words have never been spoken.

As a high school cross country runner that primarily ran to stay in shape for basketball, no matter how hard I practiced, I was not going to run a mile under 5:30.     In fact, my best time running downhill and with the wind was 5:50.  The Lord had not gifted me with legs as such.

Though everyone can give a perfect effort as mentioned in the movie When the Game Stands Tall, there are limits to what we are all able to do from a physical perspective.  Those limits should not define us or cause us to be downhearted.

You Wouldn’t Know it From Watching Me Coach

All that being said, I am an extremely competitive person.  I will also say that, when I was in High School, I earned the 100% award my senior year, and my coach stated that in 21 years of coaching, he never saw a player work harder than me.

Furthermore, any parent involved in our basketball system knows that I am extremely competitive and I do not enjoy losing. However, I do believe that most of us should stop acting like our kid is the next Tim Tebow or Kobe Bryant, and we should learn to properly prioritize our love affair with sports. Kids should put academics, spiritual growth, character development, music, and God in front of sports as, after high school, they will join ranks with all the other know-it-all fans.

Though it sounds like I am one of those “everyone’s a winner” people, I am not. In fact, I believe that I am a better coach because I am realistic. I also believe that joy is strength, and if a team as well as a coach do not protect their chemistry, self-esteem, and their joy, they will also end up under utilizing their talent.

Proverbs 14:30 tells us that “a sound heart is the life of the flesh.” In other words, what is taking place on the inside of us, has a dramatic effect upon our physical performances.

In our day of idolizing sports and putting it on the same level as music, building a business, academic learning, and spiritual development, every fan is an automatic expert that walks into a gym or a football stadium.  Though I love sports and what we can learn from it, I feel that sports needs to be put back in its proper place as well as many of the ridiculous statements exchanged in our coffee shop talks about the last game we saw.

Keep in mind that while we sit around talking about all the dynamics of a football game, little Chinese kids are talking about physics and calculus.  No wonder they are “mopping up the court” in the business world.