Relationship Problems – How to Handle in a Functional Way

Though relationship problems seem to come in all shapes and sizes, it must be understood that there are typically very simple answers to what seems to be rather complex problems. At Hitting Home, we take great delight in providing people a simplified approach to what often feels like very complex issues. 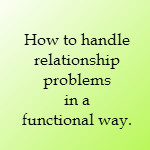 In every situation where relationship problems seem to prevail, couples struggle to see through what I call the fog of the situation. And, it should be noted that the fog machine is typically their own emotions.

Couples in such a state will do well to seek outside help that cuts to the chase and provides simplified answers. Our materials on marriage and relationships set out to do just that.

How to Handle Relationship Problems in a Functional Manner?

If you are having ongoing relationship problems, here are a few tips that should help you to stay in what I call a problem-solving mode:

Mark it down! Once couples are involved in an emotionally driven argument or fight, little good will prevail. It is more than necessary for couples in such a situation to put off discussing the matter until a later time. If not, they will find that their conversations will do very little to solve the problems at hand.

In fact, here is a short excerpt from our Marriage Conference Material and book on marriage, How to Fight for Your Marriage Without Fighting with One Another. It deals with the futility of couples arguing in an emotionally charged setting.


Stay Away from Dead End Statements

Accusations based on assumptions

Words exchanged with a condescending tone of voice

If you are about to say something that you know will be what I refer to as dead end statements, you will do will to avoid these like the plague.

Couples not only tend to engage in dead end conversations, but they often say things in the heat of battle that give the impression that there is little hope in their marriage or pre marriage relationship. I call these death nail statements. Here are a few that I hear from time to time:

You have always done that, and I do not see you ever changing

I’ve just accepted that this is my lot in life, to be unhappy in my marriage

Our marriage is never going to make it

I don’t see any hope for us

Look to the Scriptures

Rather than looking to feelings for guidance, I recommend that couples having relationship problems look to the Word of God for help in difficult times. In fact, as stated in our book, How to Fight for Your Marriage Without Fighting with One Another, if our feelings of anger, hostility, and resentment guide our words and actions, then those feelings are the true god of that relationship (Philippians 3:19). And, if the case be so, then couples should never expect their relationship to attain a higher level than what is truly ruling their lives.