Marriage Ultimatum – Why it Does Not Work 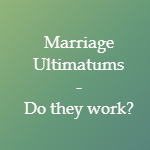 Why a Marriage Ultimatum Typically Fails

It Only Works Once or Twice.

The other issue with marriage ultimatums is that if you have threatened divorce, separation, or a change in the status quo once, yet never acted upon it, then the next few occurrences seem to carry less and less weight.

Step #1 – Work on Yourself First

I have found that there is always something that a spouse can do to create the atmosphere so that change has a better chance of happening. On this site as well as in our book on marriage we give couples very tangible steps to take in order to help promote viable change in their marriage.

Time is a very valuable commodity though few seem to want to use it in our day. The hand of Providence over long periods of time has a way of softening hearts and bringing people to a place of repentance.

Sad to say, but many couples do have great motives when it comes to solving their marital issues, just absolutely lousy methods. And, we have found that our teaching on The Top Mistake Couples Make in a Fight shows couples exactly why they have failed to penetrate the wall of emotion that is between them and their spouse.

Step #4 – Express a Fear of Hopelessness

Instead of giving an ultimatum, I advise couples to establish a time with their spouse to say something to this effect:

“You know that I want this marriage, and I want to obey my marriage vows. However, if you persist in this behavior, I am afraid of losing hope that our marriage will ever change. I am also afraid of where my feelings will tempt me to go if your behavior is no different in six months from now.”

Let me tell you why this works better than a typical marriage ultimatum:

1. Marriage ultimatums are typically delivered in a way in which the other person feels as if they do not have the power to act on their own volition.

2. Marriage ultimatums usually make you to look like the parent and the other the child. (Though the case may be so, it never helps for this paradigm to be present.)

3. Marriage ultimatums give the impression that your love is conditional in nature.

4. Marriage ultimatums are typically delivered in an emotionally charged atmosphere which is almost always a recipe for disaster.

5 comments on “Marriage Ultimatum – Why it Does Not Work”