How to Stop Arguing, Fighting

How to Stop Arguing in a Marriage Relationship

Many couples are tired of fighting with one another and they want to know how to stop arguing in their relationship. Below, I have listed the planks of the safety fence that we encourage couples to stay in when discussing difficult issues.

One of Three things Happen When Couples Fight

A great marriage is when two people feel safe and vulnerable enough to come out of their tough exterior and talk and play with one another like little children. When this in not occurring in a marriage, in a figurative sense, one of three scenarios are often in play:

Both the husband and the wife end up fighting on their respective playground. Wherefore, what is designed to be a playground of vulnerability morphs into a battleground where both feel a need to defend themselves.

The “I’m Not Coming out to Play” Scenario

One runs inside their house and locks the door while the other chases after them. It is not too long before the pursuer is banging on the door and pleading for the other to come out.

The “I Could Care Less” Scenario

One runs inside and locks the door, yet they are upset because the other is not chasing after them. 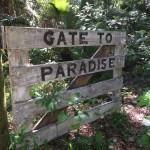 Either way, the three paradigms mentioned are not the result of conflict. They are the result of an inability to handle conflict in a Biblical fashion.

When conflict comes, I greatly encourage couples to stay in what I call a safety fence in order to learn how to stop arguing. That is, I exhort them to agree to disagree by staying within Biblical boundary lines. The planks that make up this safety fence are these:

The Planks that Make Up the Safety Fence

No Name Calling or Cursing

Stick with the Facts

Stick with the Present

Do Not Argue with the Children

Do Not Argue Late into the Night

Watch Your Tone of Voice

These planks that make up our prescribed saftey fence are covered in detail on our Audio Series and our book on marriage. They have been used time and again in our ministry to help couples that are desiring to know how to stop arguing and fighting in their relationship.