Having difficulties finding happiness in marriage? It could be that you need to set a higher goal than simply your own happiness. Here is an excerpt from chapter 1 of our new marriage book, How to Fight for Your Marriage Without Fighting with One Another.

Why Couples Get Discouraged?

During days of emotional darkness, many husbands and wives fail to see the light of happiness at the end of the tunnel.  It is at this point that many become disillusioned and discouraged about their marriage.  Consequently, they tend to lack the emotional and spiritual stamina it takes to keep moving in a positive direction.

​The scriptures teach in Proverbs 29:18 that “where there is no vision, the people perish”.  This principle is applicable to marriage in that when spouses fail to see an end in sight of their pain and misery, the marriage typically starts the dying process and their strength to persevere begins to wane.

Change the Paradigm by Changing Your Goal

Be that as it may, what if spouses in a troubled marriage understand that their primary purpose is not finding happiness in marriage, but glorifying God? Now the paradigm is entirely different in that they now have a goal that can be reached on a daily basis despite the selfish behavior of the other.  The scenario has changed in that no matter how the other person in the marriage behaves, each person can consistently reach their goal of bringing glory to God. 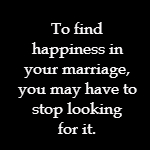 Your spouse may be able to control a number of things, but they are unable control your obedience to God.  Thus, they cannot keep you from obtaining spiritual joy by glorifying the Lord through your thoughts, actions, and deeds (Psalm 1:1-2 and Luke 11:28). Honestly, the secret to finding happiness in marriage is to find it through Christ.

Many spouses feel out of control when it comes to their marriage.  They almost feel that the other person holds their happiness as a hostage because they persist in a pattern of sin and selfishness.  A person in such as case will do well to recognize that only God should hold that much power over their emotions, and the real obstacle to emotional freedom is never anyone but ourselves. Figuratively speaking, the door to unhappiness and discontentment always opens from the inside, even in a troubled marriage.