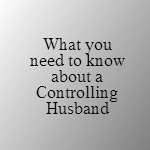 What Wives Need to Know

More than likely your husband does not dream about another opportunity to have power and control. He does not relish the idea of having the last say so and the final word, although it may appear so.

If you are married to a controlling husband, bear in mind that his need for control probably stems from one of the following:

Deep down, your controlling husband is a scared little kid. He is afraid of what others may do to him and his family if he fails to stay on guard. More than likely, his fears cause him to clamp down, over-analyze, criticize, and even play God in the marriage.

Though he may appear like an ogre, keep in mind that the most controlling people are typically the most insecure people deep down inside. In fact, their need for control often comes from the fact that they feel so out of control within. James 4:1-2

Guilt over Past Mistakes

The scriptures say in Titus 1:15, “Unto the pure all things are pure: but unto them that are defiled and unbelieving is nothing pure; but even their mind and conscience is defiled.”

This is a very telling verse in that it tells us that those with impurities in their heart tend to filter their surroundings through that sieve of guilt and remorse. Consequently, when others only see good around them, they are still feeling danger and evil.

This can cause a controlling husband to fear what few would fear. What others may consider to be a casual conversation with his wife, he will say as flirtatious behavior. What some would say is a meaningless comment, he will take as a hurtful remark.

A Lack of Trust

A controlling husband was often left to fend for himself when he was younger. Therefore, at an early age, he developed the attitude that if anything good was going to happen, then he would have to be the procurer of such a thing.

Consequently, in marriage, he tends to feel that if he does not have a say, then very little good will come of the situation at hand. In short, he really does not trust any situation that is outside of his control as, when he was young, others could not be trusted to see to his needs.