Bridge Statements and Why Every Marriage Needs Them

Posted on September 1, 2015 by Hitting Home No Comments ↓

Couples sometimes find themselves standing on the banks of very turbulent waters. Unfortunately, many lack the wisdom to build the bridges that would allow them to cross without drowning in their issues.

For this reason, I would like to discuss what I call bridge statements. These statements provide a way for couples to move from potentially difficult situations to what I call a problem-solving mode. 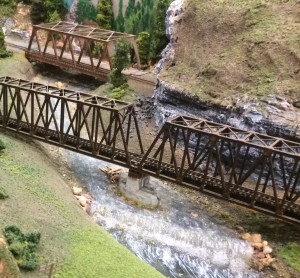 What is a Bridge Statement?

A bridge statement is something that I coined a number of years ago. I typically recommend that couples use them when they see themselves approaching a situation that will tempt them to lose focus and turn on one another.

A bridge statement, if applied at the right time and in the right way, gives couples a way to move past reactionary ways and emotionally charged discussions and into a place where they can better solve the issues at hand.

Here are a few examples of what I call bridge statements. Though they are not an end-all, cure-all, they are very helpful to many a couple that I personally coach.

This may be the number one bridge statement that my wife and I have used over the years. It is just a reminder that we are not each other’s enemy, and, though things may appear one way, we are, after all, on the same side.

If my wife and I ever find any of the following things taking place, we often use this bridge statement:

1. If our oppositeness makes us feel as if we are pushing and pulling against one another though we are really trying to go in the same direction

This actually happens a lot in marital relationships, and we have found that it is a major contributor to marital strife. In fact, we specifically deal with this in chapter 10 of our marriage book, How to Fight for Your Marriage Without Fighting with One Another.

When we are able to teach couples to properly deal with their oppositeness, they are typically able to avoid 80 to 90 percent of their previous arguments. To be honest, we have found that the smallest tweak in this area allows couples to use their differences as a stepping stone rather than a stumbling block.

2. If we have perceived that the other person’s actions are not working for us but against us

The key word in this point is “perceived”. That is, there are times when we perceive that the others person’s words and actions are against us rather than for us. And, a simple statement in faith such as, “Hey honey. Though I don’t see it now, I know we are on the same team.” will prove to be very powerful in your conversations.

3. If things are not as they appear, and we are tempted to jump to what I call an emotional conclusion before we have all the facts

Many couples come to the banks of assumption and jump right into very hostile waters. My encouragement to you is to assume that the other person is not stupid or evil incarnate. Assume that both are working toward a common goal yet in a different way.

Bridge Statement #2 – “We will work this out by God’s grace. He will give us an answer.”

People yell, curse, and show their anger when they feel there is no other way. In fact, I often say that this is why he who gets angry first always loses. It is because they are showing they have no other valid points to their argument.

When couples are tempted to lose their cool, they are tempted to move into an area of unbelief. They are conveying that God is unable to solve their issues in a way that promotes what I call a win-win situation.

When couples are tempted to jump into the waters of turmoil, they will find that a futuristic statement that verbalizes their faith will curb the tension in the room. In other words, saying something like, “Though I don’t feel it or see it at this time, God will give us an answer to this.”

When couples practice this, they find that they are able to avoid losing their temper and moving into old cycles of anger and blame. They are able to join hand in hand and fight together instead of with one another. Hmmmm. That would make a pretty good title to a book. Maybe I could call it How to Fight for Your Marriage Without Fighting with One Another.

Bridge Statement #3 – “I believe you had the best intentions.”

Assuming that someone had better intentions than what their actions conveyed is often another way of avoiding those difficult fights.

Couples often feel that when the other person states something that they have two options: argue or side with them. Consequently, many choose to fight and argue their point.

However, it should be noted, there is another option, and it involves yet another bridge statement. Spouses do not have to argue, nor do they have to agree. A spouse can always say, “I receive that.”

Honestly, I use this all the time when dealing with business or church scenarios, and couples will be wise to make a similar application.

Bridge Statement #5 – “I appreciate your viewpoint. Let me think on that.”

Couples often argue because they try to solve an issue in the moment when one or both are emotionally charged. For this reason, in chapter 4 of our marriage book, we recommend that couples learn to open the spirit of their spouse before attempting to reach their mind.