Signs of a Controlling Spouse, Romans 12:18

A Few Signs of a Controlling Spouse 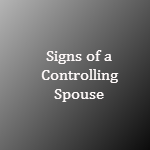 Signs of a Controlling Spouse

1. Are others allowed to have a dissenting opinion in the marriage and home?

A controlling spouse tries to manage the sacred ground of thoughts and feelings.

2. Do others in the marriage or the home feel safe to possess their own opinion on a matter?

Different is not bad, it is just different. A controlling spouse often acts as if God made twins instead of separate children with their own identity and personality.

3. Does the other spouse or family members feel safe enough to show their raw emotions?

A home should be a place of safety in that others should not have to hide behind a tough exterior.

4. Does the other person feel as if they have a right to have emotions that are different than the spouse in question?

5. Do others in the home become stone-faced, stoic, or, shall we say, emotionless so as to stay in an emotional bomb shelter of sorts?

If so, it is because they know they do not truly possess a right to have a varying point of view or they are very hesitant to show their emotions lest they are shot down or ridiculed.

6. Does the other spouse feel a freedom in their spirit around the spouse in question?

7. Does the other spouse feel as if they could never live up to the expectations of the spouse in question?

8. Does the other spouse feel as if they always fall short of pleasing their mate?

9. Does the spouse in question always have to have the final say?

10. Do the other family members make excuses for the spouse that may be a controlling spouse?

Every dysfunctional home has a black hole in it. The black hole is the one that has a way of sucking the life out of everyone else. The issue at hand, however, is that the black hole has a way of making those around him or her feel guilty if they stand up for themselves. In fact, if anyone stands up to the black hole, they become the black sheep. It’s a strange and quirky scenario, yet, nonetheless, all too common.

11. Does everything have to be on his or her terms?

12. Is there a spirit of grace or law in your marriage and home?

A controlling spirit is never parallel with a spirit of grace.

13. Is the spouse in question intimidated by functional people their age and gender?

A controller will often get along with people older than them or little children. But, they are often intimidated by a functional person their age and gender. Honestly, it is usually too much competition for them.

14. Does the spouse in question defer in conversations and situations in order to foster a spirit of peace?

“If it be possible, as much as lieth in you, live peaceably with all men.”

A controller usually does not get this verse all too well.

15. Do you often find the spouse in question dishing it out yet not able to take what he or she serves to others?

Controllers control out of an insecure heart. In fact, the most controlling people on the planet are the exact opposite of how they initially come across. They are typically insecure people that cannot take what they give to others.

Good Motives are Not Enough

Some people control out of need to overpower others, yet some out of a need to control their surroundings as they fear the evil that may come if they are not in charge.

The problem is that though their motives are typically okay, their methodology will sabotage their success. Love, not fear, is the strongest weapon mankind can wield. This is why Solomon said that love is as strong as death. (Song of Solomon 8:6)

Case and point, a parent may want what is best for their children yet clamp down so hard that they end up producing children that are spiteful to their authority and everything that is good and right. Though their motives are good, their methods as well as their oppressive spirit are counterproductive.

I feel that some feel their controlling methods are okay because their motive is good. However, as I mention in my book on marriage, it is entirely possible to have great motives, yet distorted methodology.