In our out-of-balance society, we often have a very distorted view of the Biblical teaching on headship in marriage.

The scriptures teach that the man is the head of the wife. This is evident in Ephesians 5:23 where God says:

First off, I have found that when people hold a disdain for this teaching, they always (and I mean always) have a distorted view of this passage and its meaning. In fact, when any society moves away from the Biblical model of marriage, either men exert too much power over the women at the expense of the women or women exert too much power over the men at the expense of the men. In both cases, a society ends up with a win-lose scenario which always ends in everyone losing.

Philippians 2 speaks of Christ’s love for His bride, the church. In Philippians 2:7, the scriptures teach that Christ “made himself of no reputation, and took upon him the form of a servant“.

In John 13:5, the scriptures tell us that Christ washed the disciples feet and wiped them with a towel. It should be noted that this was the lowest servant’s job in a house, yet Christ did not deem this to be beneath himself. 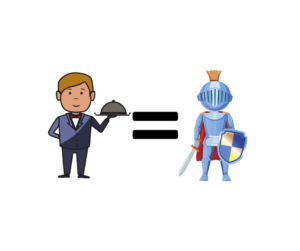 Matthew 20:28 further validates this point in that Christ said that He “came not to be ministered unto, but to minister, and to give his life a ransom for many”.

Christ is certainly the head of His bride, the church, however, His headship looked more like servitude in that He used his position to love and to protect rather than to simply demand what I call followship.

The Crown Upon The Head

The man that has to demand respect is the man that is least entitled to it. He will do much better earning respect rather than trying to verbally assert his control or lack thereof.

As previously stated, headship involves decision making. But, I have found that if I have to cling to my title rather than my influence over my family, then I am a bad chief as Davy Crockett would say.

Matthew Henry said that if the man is the head, then the woman is the crown upon the head. The meaning is obvious in that if the crown shines, the head always looks better.