Overcome with a Fear of Losing Your Husband or Your Wife?

If you have a fear of losing your husband or your wife, there are usually three to four classic mistakes that you will be prone to make.  One of those mistakes is to desperately pursue the other person.  This section is part two of a previous article called How to Win Your Husband or Wife Back.

Below we will deal with the problems of becoming fear driven and pursuing the other person with a fervor that is extremely overwhelming to the one you are attempting to win back.

You are Presenting an Unattractive View of Yourself to Your Spouse

When spouses have a fear of losing their husband or their wife and they have a desperate spirit, they present an unappealing side of themselves.  Their demeanor is, at best, weak and that of a freshman at a high school dance begging a senior to invite them on the floor. 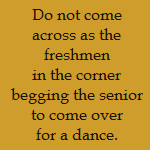 Your spouse does not need a charity case as much as a husband or wife that is gentle in spirit and strong in conviction.  He or she will be more attracted to someone that is calmly and confidently serving out of a sense of obedience to God rather than a fear of losing their mate.

Furthermore, by focusing on loving the other person uncondionally without expecting anything in return, you will help to encourage your spouse to step up into the carriage of a better relationship rather than settle for the mediocre marriage they have had.  This is vital in that most spouses in a troubled marriage feel they have one of only two options:  leave the relationship or settle for the dismal relatonship they already know they have.  It is best to propose a third option.  Show them viable change that is based on neithqer your fears nor a spirit of impatience.  Start loving them with no strings attached whatsoever.

Your Spouse will feel Controlled

Some men and women formerly served themselves in a relationship through inconsiderate words and actions.  Realizing the error of their ways, they repented and are doing everything possible to repair the bridge of trust between their spouse’s heart and their own.  The only problem is that even though some have amended their external actions, they may be still serving themselves by catering to their fears instead of the needs of the other person.

In an odd sort of way,  desperate spouses will use even the most Biblical of actions to control the fate of their marriage.  Though they are usually doing and saying the all right things, it is often with an unhealthy spirit of expectancy based on fear of losing their husband or their wife.  Instead of loving their spouse unconditionally, they are actually busy serving their fear of either losing their mate or feeling abandoned or unwanted.

Usually, a man or woman in such a predicament is slightly perplexed.  The confusion is brought on by the unresponsiveness of their spouse.  In their mind, the other half is hard-hearted or hurt beyond repair.  Many times, it is neither as the other person feels that their spouse’s motivation is skewed.  Deep down, they feel that if they waiver from their defensive posture, they will be pulled around by a leash made up of good words, fair speeches, and romantic acts.  In short, they are not resisting being loved as much as they are feeling controlled.

Your Spouse will Know that Something is Up

I like to say that every person is a “psychologist” in that you may be able to lie to someone’s face and deceive them intellectually, but it is much harder to deceive someone’s spirit.  Yes, it can be done, but most of us know when something is just not quite right.

If your motivation is not that of unconditional love, your spouse will know that something is up.  No, they may not be able to verbalize their thoughts and their feelings, but they will have reason to be hesitant and, at times, extremely cautious.

Unconditional love is a great weapon.  It is the strongest weapon known to man according to the Song of Solomon.  But, it is possible to have a wonderfully smooth stone of love in a sling of selfish expectations.   You will find that this will not serve your marriage well.